'Winky' gets rid of 'Sugar'

Ronald ‘Winky’ Wright stole the show and stunned Sugar Ray Leonard via KO in the 9th in Wednesday’s quarter-final of the ‘eWBSS Middleweight Legends Tournament‘.

The shocking outcome sends Wright in the semi-final on Saturday against either Carlos Monzon or Jake LaMotta.

Both fighters set off at a frenetic pace in the opening of the fight, simulated on EA Sports ‘Fight Night Champion’ at the eBoardwalk Hall in Atlantic City, New Jersey.

Leonard scored well with his right and two-punch combos, Wright returned fire with the left, but it was Sugar Ray who was ahead on the scorecards after the three first rounds. As you would expect the legend to be going into the squared ring as a solid favourite and Tournament 2 seed.

But ‘Winky’ Wright started to seriously fightback from the fourth and turned things upside down with a huge left in the fifth to send Leonard to the deck – he beat the count and returned to sender in the 8th, but Wright was also able to climb off the canvas. What drama!

Another attack from Wright floored Leonard twice in the 9th., first with a straight right hand and then with a left to put one of the pound-for-pound best in boxing history out for the night, and out of the tournament. Wright was behind 76-74 on all three scorecards at the time of the stoppage. 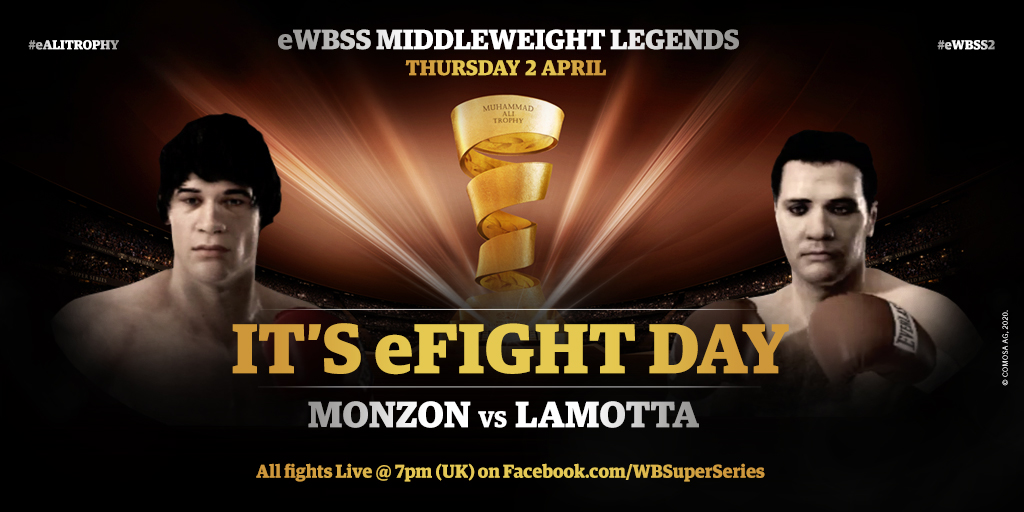 Monzon and LaMotta are not among us anymore, but their names and fame will never be forgotten by the fans of the sport.

Carlos Monzon held the undisputed world middleweight championship for 7 years and is widely recognized as one of the best middleweights – and across all divisions – ever to step inside the squared circle. The Argentinian retired in 1977 as a champion with one of the most impressive boxings records of 100 fights with 87 wins, 9 draws, 1 NC and 59 KO’s – his three only defeats came early in the career and they were all avenged!

Monzon was known for his speed, punching power, and never-ending work rate, and as able to adapt to whoever was put in front of him during a career of 14 years.

‘Raging Bull’ LaMotta is broadly acknowledged as of one of the toughest fighters of all time and for having fought the great Sugar Ray Robinson on six occasions - win only one victory for the bull from the Bronx. His chin was legendary, and his aggressive and relentless style embodied everything brutal about the sport.

In 1949, LaMotta defeated France’s Marcel Cerdan for the World Middleweight Championship. He kept his champion status until Sugar Ray Robinson ended his reign at the Saint Valentine's Day Massacre of boxing in 1951. LaMotta took a horrible beating and the fight was stopped in the 13th round …

LaMotta’s life is the basis for one of the best boxing movies of all time, Martin Scorsese’s Raging Bull (1980).


The entire ‘eWBSS Middleweight Legends’ tournament will be streamed on the World Boxing Super Series Facebook page at 7pm (GMT) every day from Monday March 30 until the final on Sunday April 5.

The eWBSS tournaments, simulated on EA Sports ‘Fight Night Champion’, are created by the real World Boxing Super Series to provide some much-needed relief and entertainment for fight fans around the world during these testing times.