Richard Riakporhe vs Jack Massey confirmed for the British title

Richard Riakporhe and Jack Massey will clash for the vacant British Cruiserweight title at the top of a JD NXTGEN show at the famous York Hall in East London on Thursday December 19, live on Sky Sports in the UK and DAZN in the US.

Big-hitting Riakporhe (10-0, 8 KOs) went the distance for only the second time of his career in July as he outpointed undefeated and highly-rated Bournemouth prospect Chris Billam-Smith in a close battle at The O2 in London to retain his WBA Inter-Continental title.

Massey (16-0, 8 KOs) is firing on all cylinders again after an arm injury ruled him out of his July British and Commonwealth title clash with Lawrence Okolie, and ‘One Smack’ says he is ready to propel his name to the top of the domestic Cruiserweight scene in his first major title shot.

“I’m over the moon to be fighting for the British title at the top of a bill at York Hall,” said Riakporhe. “I’ve been looking forward to this opportunity for a long time and now it’s here I need to grab it with both hands.

“Jack is a decent opponent. I heard that he beat Chris Billam-Smith in the amateurs so he should have a good pedigree. He’s unbeaten in the professional ranks with a strong record so this should be a decent test for me.

“I think Jack will come to fight and he’ll go for it, but I’ll be too strong for him and I’ll have too much will and determination – I’m going to light him up like a Christmas tree. A win here could lead to even bigger opportunities and I know what I have to do.”

“I’m in the best shape of my life and I feel great,” said Massey. “I’ve had a few setbacks recently, but they’ve made me even hungrier for this opportunity. I’ve got to come away with that British title on the night and I’ll give my all for it.

“This has got the makings of a great fight, we’re both big punchers and we both know how to finish a fight. This will be my first time fighting at York Hall so it’s even more special for me. It’s a prestigious place to fight and a prestigious belt to win so there’s a lot on the line – a win would be massive for me.”

“I’m delighted to be returning to the famous York Hall on December 19 for a Christmas cracker of a JD NXTGEN show topped by the British Cruiserweight title showdown between undefeated prospects Richard Riakporhe and Jack Massey,” said Eddie Hearn. “Riakporhe is quickly establishing himself as one of the most feared Cruiserweights on the domestic scene and secured an impressive breakout win over Chris Billam-Smith last time out. Massey has been waiting for an opportunity like this for a while and finally lands his big chance after the disappointment of his summer injury. Some of the best up-and-coming talents in the country will be looking to impress on the undercard with all of the action shown live on Sky Sports and DAZN.”

“We’re bringing you a pre-Christmas cracker as Richard Riakporhe battles Jack Massey for the British title on another exciting JD NXTGEN bill," said Adam Smith, Head of Sky Sports Boxing. “Riakporhe has emerged as an explosive contender - and next comes up against the well-schooled Massey in a high quality encounter for that coveted Lonsdale belt. Shannon Courtenay, Fabio Wardley, Charles Frankham are also back in action at York Hall as we extend our powerful schedule in 2019.” 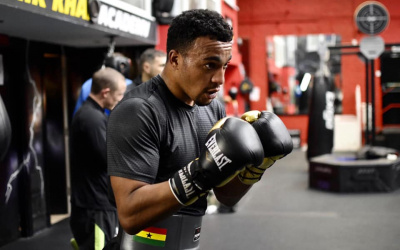