'Raw and wild' Lawrence Okolie is getting knocked out, says Matty Askin

Matty Askin is predicting an early night for Lawrence Okolie when the rivals collide for the British Cruiserweight title at Wembley Stadium Connected by EE this Saturday September 22, live on Sky Sports Box Office in the UK and DAZN in the US.

The Blackpool man has been preparing for his crunch showdown with Rio Olympian and rising AJ Boxing star Okolie by spending time away from his partner and son in his dad's caravan in Eccleston, Lancashire, and believes his humble surroundings will inspire him to put Okolie in his place.

> "I’ve locked myself away in a caravan for this camp," said Askin. "I like to keep myself to myself when training, the solitude helps me to focus on the job at hand. The reasoning behind it is mainly the driving, everything is based around the gym and caravan. I don’t have to go back to Blackpool every day so it’s just perfect. It pains me to stay away from my partner and little lad, but it’s the right thing to do.

"This fight is all that’s on my mind, it's the first thing I think of when I get up and last when I shut my eyes. I run through a load of different potential outcomes which I think is going to help me when it comes down to it. Living in a caravan has given me a lot of drive to beat Okolie."

Askin halted Craig Kennedy in six to claim the Lonsdale belt at the Motorpoint Arena in Cardiff in May 2017 before stopping Scotland's Stephen Simmons inside two rounds at York Hall in March, and is aiming to make it three KO's on the bounce at Wembley this Saturday.

"In my head, he's getting knocked out, I don’t see this going to points. Usually what’s in my head is usually what comes off on fight night so I’m very confident. I’ll be walking straight in the ring, smacking him on the chin and going from there. The atmosphere won’t get to me, I’m just focused on the fight itself.

"Lawrence has done well so far, credit to him for taking this fight. I’m only a fight or two away from launching myself in the World title mix and to be honest I think he’s a few behind that. He’s a bit raw and wild but there’s no doubting he can punch. His opposition hasn’t been the best and I’ll be able to suss him out in the first three minutes of the fight." 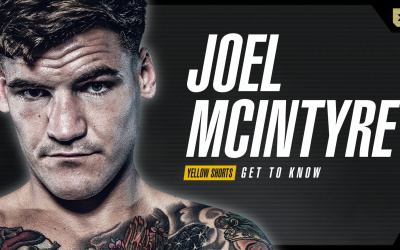 Get to Know... Joel McIntyre