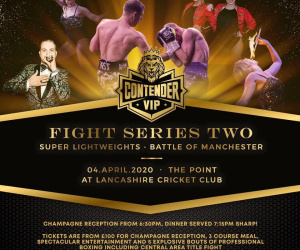 The highly anticipated Contender VIP 'Battle of Manchester' event, which was due to take place on April 4 at 'The Point' at Lancashire County Cricket Club, has been postponed due to the COVID-19 virus which was swept throughout the globe in recent weeks, causing mass cancellations within the sporting and events world.

Boxing is one of the toughest businesses to work in. If your career is in boxing you are essentially self-employed. If there are no events, the fighters can't fight, the managers can't manage, the promoters can't promote. This all results in nobody getting paid. It's not the easiest time to be in boxing right now.

Contender VIP was set to follow up from its blockbuster show at Manchester's 5-star Hilton Hotel, Deansgate, with arguably the most evenly matched lineup to date that included a Central Area title fight between Jimmy First and Steve Brogan, a Contender VIP tournament which was due to showcase 4 standout prospects clashing with the winner taking home 10 thousand pounds and also an undercard filled with top-level talents such as the returning Kyle Lomotey and Jake James.

Unfortunately, due to the COVID-19 virus, all British boxing events have been postponed and/or canceled until further notice. Promoter Mike Le-Gallez, who has been the driving force behind the fast-rising Contender VIP Promotion discussed the implications of sporting events being canceled on a global scale.

Le-Gallez said, "Firstly I'm heartbroken for the fighters, not just on the Contender VIP event but fighters all over who were due to be boxing and therefore getting paid. People forget if the fighters don't fight, they don't get paid, so it's a hard time to be a fighter right now and I really hope things can get back to normal sooner rather than later so the fighters can start earning money for their families again. The fighters had sold a lot of tickets and the event had practically sold out weeks in advance, so I'm gutted for all parties.

"I'm absolutely devastated we have had to postpone the April 4 'Battle of Manchester' promotion. I believe this promotion was set to be our most evenly matched explosive event to date and a fabolous setting, so I am honestly gutted to have to postpone it, but it is on the advice of the British boxing board of control and government, so we had to make a decision that was in the interest of public health and wellbeing so we did that. People's health and wellbeing is the priority right now and we at Contender VIP would never jeopardize that in any way.

"In regards to the April 4 show, Contender VIP has made a commitment to putting on action-packed shows for fight fans and will continue to do so. When we are given the green light, we will announce a new date and look to bring a show that is bigger and better than any of the sold-out shows that we have run before it and continue to try and give fight fans the very best value for money we can!"