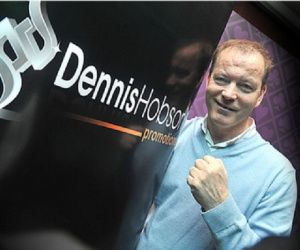 Promoter Dennis Hobson says boxing fans can expect to see two top-quality title fights when they tune into Freesports (Freeview 95, Freesat 252, Sky 424, BT 95, Talk Talk 95) on April 27.  Hobson linked up with the free-to-air broadcaster last year and his show at the Ice Sheffield Arena is the third to be aired by the growing sports channel.

Topping the bill will be local fighter Liam Cameron, who defends his Commonwealth Middleweight belt against Nick Jenman.  A former ABA champion, Liam snatched the title last October in a barnstorming performance against Sam Sheedy, stopping his local rival in eight exciting rounds.

‘Cannonball’ Cameron, 20-5 (8), won the Commonwealth strap at the third attempt, after two previous losing assaults at super-middleweight.  The 27-year-old is convinced though that he has learned from those reverses and is promising he will give Jenman the toughest night of his career.

Jenman, 20-10-1 (3), enters the contest as a late replacement for Danny Butler, who pulled out earlier this month.  The Brighton fighter, who also doubles as a scaffolder in his day job, believes he will thrive fighting away from home, and with no pressure on his shoulders, and is warning the home fans to expect an upset.

Chief support to the main contest comes in the shape of an all-Yorkshire derby battle – Doncaster’s Craig Derbyshire defends his Central Area Super Flyweight Title against Sheffield’s Tommy Frank.  At 6-0, Tommy is the rising star touted for bigger things, but he faces a stiff test against his local rival.  Craig, 5-25-3 (1), has been in with some top fighters – including Charlie Edwards, Sunny Edwards and Don Broadhurst – and will use his vast ring know-how to keep hold of his belt.

“The outcome of this fight will all depend on which Liam Cameron turns up,” stated Hobson.  “After his devastating display against Sheedy, I’d like to think that will be the Liam Cameron that turns up.  He has all the pedigree and ability, but sometimes he’s just gone through the motions.  I do think he’s matured though and he has the capability to win something a lot bigger.  Liam is the favourite but he has sometimes gone into his shell and Jenman’s style means he’ll be in your face, because he comes to fight.  If Liam does go into his shell again then he’s going to struggle.

“Nicky has grabbed this opportunity with both hands, and he fought quite recently, so he’s in good shape.  From the first bell, he will give it a right go.  Because of his character, he will turn the fact he’s away from home to his advantage.  He won’t be fazed going into Liam’s backyard and he doesn’t have the pressure of fighting at home.  I think this is a cracking fight.  It’s a great fight for TV too; another exciting fight for Freesports.

“Tommy Frank against Craig Derbyshire for the Central Area Title is another really good fight.  Tommy is a stylish fighter, but Craig will come and have a go.  Tommy has been on quite a few of our shows, and I do rate him but this isn’t a walkover for him.  Craig is the champion and he has a lot of pride.  Even though he has a mixed record, he’ll be desperate to hold onto his title.  He’s sold a few tickets and he’s not just coming to pick up a few quid.  So, this is another cracking fight for the fans and viewers.”

The public weigh-in for the show will take place at 1pm on Thursday April 26th at the Ice Sheffield Arena.

The show will be broadcast live on Freesports.  For more information visit www.freesports.tv

Bradley Skeete: Beating Lajarraga convincingly is my route to Matthysse