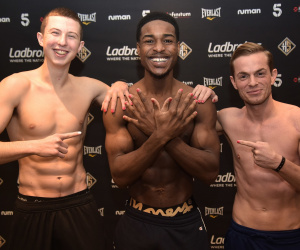 The boxers will all compete on a show on Friday 18th December, which is headlined by the mouthwatering British Light-Heavyweight title showdown between Shakan Pitters and Craig Richards, live on Channel 5 from 10.30pm.

The initiative follows in the footsteps of snooker player, Ronnie O’Sullivan, who painted his nails pink in support of Future Dreams in October during the English Open.

How to watch Shakan Pitters vs Craig Richards

Promoter Mick Hennessy is thrilled to be supporting Future Dreams, saying: “It’s been a tough year for everyone, particularly those fighting such a terrible disease as breast cancer. I’m so pleased that we’re able to do something to create awareness for such an important cause in women’s breast cancer, the guys actually really like it so who knows, this could well become a trend for boxers across the globe moving forward.”