Kell Brook (39-2, 27KOs) once again dares to be great by challenging long-reigning WBO World welterweight champion Terence Crawford (36-0, 27KOs) in his own backyard in Las Vegas this Saturday night.

BBN turned to their panel of boxing experts for their predictions for the world championship clash:

"I’d love to see Brook win, I used to be a massive fan of Kell, but I think Crawford is a different animal and it’ll likely be an early night for everyone."

"As much as I would love to see Kell come back with the win and become a two-time champion of the world, unfortunately I just cannot see it and I think Crawford finishes him within 10, I hope I am eating my words and Kell wins but we shall see, good luck though Kell! Get that W!"

"I took two of my southpaws - Stanley Stannard and Evaldas Korsakas - over to spar Kell three weeks ago and my thoughts on him then was still very strong, fit and powerful, but just a little bit easier to hit nowadays.

Kell did look very good last time out but it was nearly two years ago and against average opposition. I believe Kell has got a puncher's chance, he is still sharp, accurate, powerful and in fantastic shape but Terence is a formidable champion.

My heart really wants Kell to win and if he does I'll be an happy man but my head says Crawford will hit him too hard and too often, break Kell down and force a late stoppage, but I really hope I'm wrong."

"Its understandable for Crawford to be the heavy favourite. He is the pound for pound talent and still operating at a high level.

Brook has suffered painful defeats and his discipline has often been the excuse given for poor performances.

However, he looks motivated and was the one that pursued this fight. He is also bigger, still technically adept and has good power.

I feel that if Brook puts the pressure on Crawford and roughs him up, he has a great chance at causing the upset. If the pace drops, then it'll give Crawford the time to measure his attacks and dissect Brook.

Brook is hungry for this and I think he has just enough in the tank to deliver one last great performance. Couple this with my scepticism of Crawford's punch resistance at welterweight, along with the madness of 2020 and we have a great recipe for a potential upset of the year."

"I think Terence Crawford is the best fighter in the world. And although Brooke is solid and experienced I also think he’s finished. I hope I’m wrong but I think Crawford stops him between rounds 7-12."

"To be fair, Kell does look in good shape mentally and physically, but surely cannot be any better than shown in the past and that would not be good enough.

Kell has proven to be the edge of World class and maybe in it, but Crawford has looked above world class and reached elite level for a few years and that will be the difference, simply too good and Brook will do well to see the final bell, in my opinion."

"I'm backing the Brit for this one! I'm letting my heart rule my head!

I know how good Crawford is, the fight is in his backyard, he's unbeaten and formidible, and he's the defending champion, P4P great, so it's all stacked up in his favour. But Brook looks in great shape and he's a consummate professional; he could very realistically grind out a points win with determination and grit.

That said, the more the rounds go on, the better 'Bud' will get and he breaks fighters down and breaks their heart, so I know realistically the American champion will win the fight, probably force the stoppage from round seven onwards, so it's probably a bit of an unrealistic prediction from me, but I'm keeping the faith no matter what! Go on Kell!"

"I like Kell, a lot. I really hope he proves me wrong, but I can’t see past Crawford on points."

"I’d have to go with Crawford on a unanimous points win in reality terms, but 8/1 is a great punt for Brook to get the upset and that’s where I’ve placed a little disposable cash, just incase!"

"It’s another great fight we’re going to witness in the last month or so.

Kell Brook looks very motivated to prove his doubters wrong. The weight 147, of course, has always been a problem for him in the last few years so it won’t be easy.

Terence Crawford is one of the best P4P fighters in the world with too much boxing skill and his IQ is phenomenal. He’s the best switch hitter in the game and is a great finisher.

The first few rounds I see Kell giving problems to Crawford, but as rounds go on, I see Crawford breaking him down mentally and physically to stop him late."

"Terence Crawford by stoppage for me.

I believe it is a step too far for Kell Brook in the circumstances, and despite his great shape, I can see Crawford showing exactly why he is a world class operator in this division."

How to watch Crawford-Brook in the UK 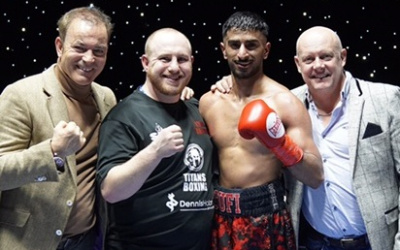