Sam Eggington vs Ashley Theophane - Who wins and why?

The Panel predict the outcome of Eggington vs Theophane

The super-welterweights do battle over 12-rounds, live on Channel 5, but who wins this contest of youth and power vs experience and skill - BBN asked their trusted 'Panel' for their view:

Theophane is way past his best and Eggington is still young, so I think it'll be a convincing points win for Sam, maybe even a late stoppage."

"Great fight, I’ll look forward to this one.

I have to go with my man Ashley, one tough dude, and heaps of experience in fighting, not only around the world, but in Vegas where there's dog house rules where you fight til the end."

"I can’t see this going 12!! I think it’ll be a really fun fight with the Egg-man coming out on top."

"I'll go for a Sam Eggington stoppage in the mid rounds, just too big and strong for him. Ashley is experienced but his age will be a contributing factor to in that he will not be able to do what he used to."

"This should be a good fight, both men are really durable and have good engines on them. I’ve trained around Ashley in that past, and he is a very smart operator. Eggington impressed me in his last fight against Ted Cheeseman, however I think Theophane’s experience will be enough for him to edge out a points victory."

"This is actually a tough one for me to call personally. We help sponsor Sam Eggington and have the benefit of speaking to him and the camp now and then, and know how much he is ‘wound up’ still from the Cheeseman fight, but equally Ashley Theophane is certainly no mug. He’s fought at the top level who once upon a time almost/should have/could have beat Danny Garcia; had excellent team surroundings through his career and, on a personal side, he also uses Buy My Fight for his tickets so to predict the outcome of two friends, two gents, two talented fighters is a tough one.

If Sam can refrain from doing anything silly, I’d have to edge him for youth and ambition but put it this way, no bookies are taking my money this weekend!"

"I think Sam Eggington on points. Ashley been about, he's a good fighter but it’s time to hang the gloves up, I think. He been in some tough and good fights. Good luck to them both."

"I understand that Eggington will be favourite to win, but there;s two reasons why I'm not sure he will. Firstly, Theophane has onlyy been stopped once, by four-weight wotld ruler Adrien Broner, and Eggington's best chance of winning will be by stoppage. Can he do better than Broner? Secondly, Theophane's vaster experience, grit and many rounds of pads with the world's greatest trainers, could outbox and outfox Eggington.

I've always been a fan of Ashley and I admire what he's acheived in his career, he's a huge inspiration. I'm backing Ashley to win on points." 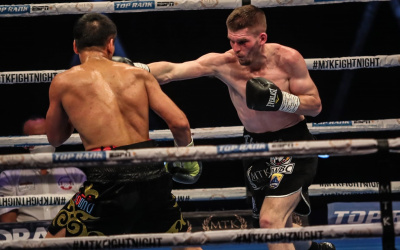