Welshaman Liam Williams (19-2-1) will make a first defence of his British middleweight title against former English and IBF European champion Joe Mullender (11-2) on March 8 at the Royal Albert Hall, live on BT Sport.

Brentwood boxer Mullender gets the home advantage but his opponent has now been a British champion in two weight categories and has only suffered losses to a world champion in Liam Smith.

It's 'The Machine' vs 'Smokin' Joe', but who wins? BBN turn to their knowledgeable panel of experts for help:

What Williams and Mullender say:

Liam Williams: "I do believe I am a class or two above him to be quite honest, but I also think he will give anyone a decent fight because of his style. He would give most fighters in the world a good fight, however long it lasts, because of the way he approaches fights."

Joe Mullender: "I respect Liam as a fighter, he has done what he's done and is levels above me on paper, but I don't really care who I fight, to be honest. For me, it is all about the British title and the odds are stacked against me, but that is what I like."

What the experts say:

"I’ve sparred a lot of rounds with Joe and know first hand that he’ll give any middleweight domestically a tough night. However I think Liam is above the domestic scene and he beat a very good fighter convincingly in Mark Heffron last time out. My prediction is Williams late or on points but it won’t be easy."

"I think the gulf in class, skill and ability is vast in this contest. Mullender is a decent pro and nothing but respect to him but Liam Williams is a classy operator and I think Williams believes in his ability and knows he is levels above Mullender.

I think Liam will feel his way into the first round, find his feet then set about him early and have rid of him by the mid rounds."

"What an opportunity for Mullender and what a great fight!

I know Mullender has had troubles with injuries etc. since the English title win, but I know he’ll be up for it and train hard with [trainer] Jamie Williams! Both fighters hate giving up ground, both are come forward aggressive fighters! I believe Williams will have the better technical ability and experience at higher level fights but one thing I know is it will be a war and an entertaining fight for us fight fans."

"On paper, you have to go with Liam Williams - a two-weight British champion that has only lost to a world champion.

Mullender has got a style that rarely changes; he just gets fitter, stronger and better at delivering it with each new fight. He is relentless and sets a high pace, but he can be easily outboxed, which should really play into Williams' hands because he is a very experienced, capable and talented fighter, thriving under Brendan Ingle's watchful eye, and Mullender doesn't possess anywhere near the same skill set that he has. But, have you seen how Joe won his English title? It was sheer heart and determination, and was an astonishing spectacle to watch. He was like a man possessed, completely relentless and undeterring, and he could have been fighting a brick wall and he still would have won!

This British title is everything to him and he will go out there and punch non-stop for 12 rounds solid, so this fight is likely to be very close, in my opinion. I would go against the grain and say that Mullender wins on points."

"Good fight, both come into the bout in decent form off the back of stoppage wins but Williams really impressed last time out against a good opponent in Heffron. I think Williams has the momentum and will only grow further as a fighter now that he is British champion, I am picking him by late stoppage or unanimous decision in this."

"I think Liam Williams is a level above Joe Mullender skill wise. Joe can fight, but I think this fight may have come a bit too early for him.

For me, Williams is even better at middleweight. He's not killing himself to make weight anymore and his transition of styles to that of the Ingle Gym's seems to have given his career a new lease of life.

I can't see passed a Liam Williams win in this one."

"Joe Mullender wins this one. I think he will win by close points verdict and it's very nice to see boxing back at the Albert Hall."

"Liam Williams vs. Joe Mullender is a sizzler of a fight! I'm expecting Mullender to be on the Welshman's case throughout the rounds; relentlessly harassing him, ferociously pressing, aggressively wading forward, throwing heavy shots and not allowing the British Champion a minute's breather.

To counter, Williams will utilise the breadth of the ring, keep on the move, be patient, switch the pace and direction before executing a coiled-spring attack: "in and out" in a blink, with power and precision.

A tough fight for both men and an extremely difficult one to call. But, I think 'Smokin Joe' may just cause an upset come March 8.

A points win or late stoppage for Mullender."

"The venue is superb and this has all the ingredients of being a great fight, each having momentum following their impressive wins in the last quarter of 2018.

Despite Joe having the home advantage, I think that the aggressive two-weight British champion Liam will take it." 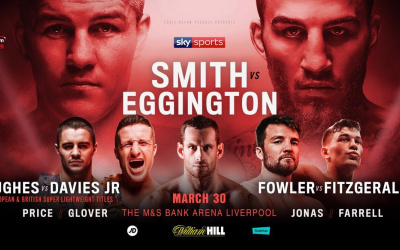