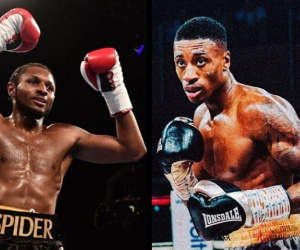 'Spider' vs 'Shak' meet on March 28 in Birmingham

The vacant British light-heavyweight championship, relinquished by Joshua Buatsi, will be contested between the one and two-rated contenders Craig Richards (15-1-1, 8KOs) and Shakan Pitters (13-0, 4KOs), live on Channel 5.

Birmingham's Pitters, 30, is a former English light-heavyweight champion and Ultimate Boxxer winner. 'Spider' Richards, 29, is the current WBA Continental light-heavyweight titlist and has fought for the Lord Lonsdale belt before when he stepped in at late notice to challenge Frank Buglioni, which was an enthralling encounter that went the distance. That remains his only loss and he comes into this contest on a six-fight winning streak against an unbeaten prospect with plenty of potential.

BBN quizzed their panel of experts on who wins and why?

"Great fight and a proper proper 50/50; and managers, promoters, fighters - especially prospects - take a bow and wake up.

Big respect to both teams, this is what boxing is about; every one's a winner and both boxers can still move on and grow."

"Craig Richards to win via points.

I feel that he has enough experience to handle the pressure of Shakan and, mentally, he can excel in the later rounds of their fight."

"I really like this fight. Richards is a slick fighter with some decent wins recently.

Pitters on the other hand has had almost as many fights but against lesser opposition. However, he has developed his style and power as shown when he won the Ultimate Boxxer 2.

Richards is the more polished technician and will likely take an early lead on the scorecards but I think Pitters - who has the higher potential - will claw himself back into the contest and edge a close unanimous or maybe a split decision.

Either way, it'll be fascinating."

"Whilst Richards was impressive against Jake Ball, I think this is a clash of styles where Pitters is better suited.

Shakan starts quick, throws fast, and heavy. Oh, and accurately. He seems to have it all. I’m going to call a stoppage win by Shakan Pitters – I think he’s the real deal and will go all the way."

"Good fight and Pitters looks big and dangerous, however I'm going for Richards to come through some early sticky moments and win."

"This is the most difficult of predictions I've been asked to do because I count both Craig and Shakan as friends and could not choose between them.

What I will say is that I can see this being another barnstormer of a fight like Pitters' last fight with Dec Spelman, when he won the English title.

Craig will represent yet another level for Shakan to step up to, so it'll be a real close points decision, I believe, at the end of this contest.

Craig has the upper hand in experience over Shak and has fought on bigger shows, so that'll go in his favour. He's challenged for the British before and did so well considering he didn't get a full camp for it - one judge had it at 113-116.

His last three fights have been against some top contenders, his win over Jake Ball was a great victory for him and he surprised a lt of people with that early knockout. Beating a 10-0 Andre Sterling, knocking him down in the process, was also a fine victory. His last fight ended as a draw, but he was up against another hard opponent, so he hasn't had it easy. I think that last result would have scared him aack better than ever for this fight with Shak.

I first met Shak ahead of his Ultimate Boxxer tournament. He's the best winner to come from that series, he literally breezed his way through it and came out of it hardly sweating. He was unbelievable that night.

I certainly believe that there's not much separating these two and it'll go right down to the wire. I can see a split decision, but couldn't say which way it goes. It's a guaranteed good fight and there's only winners, no losers here."

"As Joshua Buatsi has vacated the British belt last September to move up to bigger and better things, this now leaves Craig Richards and Shakan Pitters to battle it out for the prestigous Lonsdale belt.

Richards has already had one crack at the British light-heavyweight title before, losing on points to now retired fighter Frank Buglioni. Pitters, on the other hand, is undefeated - 13-0, 4KO's - and is a slick, tall, rangey boxer. However, I am leaning towards a Richards points win. His experience in fights aganist the likes of Jake Ball, Frank Buglioni and Andre Sterling, I believe, will get him over the line on this occasion. He has the experience and know-how to win.

Richards on points for me."