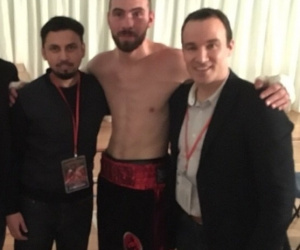 'Sniper' Sam Smith gets off the mark

The 175lbs four-round contest was scored at 39-37 to the 22-year-old from Surrey known as Sniper, he said, “It was a hard fight to be honest, he came to win and he was tough.”

Travelling opponent from Stoke-on-Trent, 28-year-old Mark Till has upset the odds before to defeat other debutants during his two year-long professional boxing career.

“He’s had over 20 fights and I expected a tough fight so I knew he would always be there,” Smith continued. “There’s only four rounds so not much time to break him down, I came out a bit slow and didn’t have the best start, probably nerves or the occasion got to me but I was relaxed in the changing rooms, I just stiffened up when I got in there.”

Referee, Jeff Hinds scored the contest at 39-37 to Smith who admitted, “The last three rounds I won, I hit him with some lovely shots and he still came back so it was a good learning curve. There’s a few bits to work on but the longer the fight went on, the more it suited me.”

Respected trainer, Paddy Fitzpatrick added, “When any boxer is making their professional debut it’s about dealing with the new emotions and keeping their composure.

Sniper hadn’t boxed in two years leading into his first pro fight and so he had a lot more to deal with than the usual debutant does.   “He was very relaxed in the changing room and on the mitts but during the ring walk, the reality of the situation got to him a bit.   “He controlled his composure quite well but was tight in the first round with his jab. Half way through the second, he started to loosen up and find his opponent with jabs and uppercuts, and by the third and fourth, he was bossing every exchange albeit exchanges that his opponent was initiating and came out on top at the end over an extremely aggressive and game man.”

The former three-time national amateur champion from Dunsfold spent an entire year in the gym preparing for his inauguration into the paid ranks.   However, Smith anticipates a busy 2016, stating, “Few days off over Christmas and the next fight will be in February in Swindon.

“I’ve got six fights lined up with KM Promotions next year, I should be in a good position if I win them all.”

Sniper hails from Fitzpatrick’s Boxing Gym in Swindon and benefits from the best sparring possible, he explained, “Paddy has got good contacts with a lot of people so the top sparring will continue into next year.   “I went down to Wales and sparred Enzo Maccarinelli in preparation for his Roy Jones Jr. fight.

“He hits hard, probably the hardest hitter I’ve ever sparred against. We did five rounds the first week then went back and done six the next week.”

“I’ve got a great team around me and we all learn off each other, the sparring is fantastic as well,” said Smith. “Really good place right now with a good team around me so I’m really looking forward to next year.”

The rest of the packed card featured Sniper’s 26-year-old teammate, Garvey ‘Old School’ Kelly (4-2) and 26-year-old cruiserweight, Luke ‘The Duke’ Watkins (6-0), who sizzled with a spectacular second round stoppage to extend his unbeaten record to six in six.

Sam Smith would like to thank his sponsors, A1 Group and PR Manager Tim Rickson