On this day...John Murray wins his first pro title

In the Mancunian's 16th bout, he beat Spaniard Ignacio Mendoza to claim his first professional title at the Nottingham Arena on a Hennessy Sports card televised by Sky Sports.

The following year, he was awarded 'Young Boxer of the Year Award' by the BBBofC.

Unbeaten Murray was ahead 78-75 on two of the judges scorecards on December 2nd 2015 until a technical decision halted the championship bout in the eighth-round of the ten-rounder. 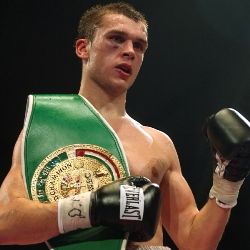 He went on to capture English, British and European lghtweight titles before an eye injury blighted his career for good in 2014.

His last bout was against Anthony Crolla for the WBO Inter-Continental title, his second attempt at landing the belt as Kevin Mitchell thwarted his first challenge in July 2011. Five months later, he challenged, unsuccessfully, for the WBA world lightweight title against American Brandon Rios.

Groenewald, a seasoned championship operator with a renewed vigour for the sport, was a challenger who had waited three years for the opportunity, and launched the first assault in the opening round with a hard right hand, immediately exposing Froch’s open left guard, but quickly felt the weight of that trademark lightning jab as the Cobra struck out from his hip, but was kept extremely busy by his eager competitor.

Both 28-year-old fighters emerged from their respective blue and red corners all guns blazing and entertained throughout the 14 minutes of frenzied action until the referee, Howard Foster, jumped in and stopped the fight with just moments to go in the fifth round, causing the challenger to erupt in fury at the premature ending to his campaign.

Future IBF world middleweight champion Darren Barker moved up to 7-0, and impending Southern Area middleweight titlist Daniel Cadman (10-0) reached double figures on his record, but he was doomed to lose his next two fights in the first half of 2006.

Billy Corcoran (13-1-1) defeated Brummie journeyman Peter Buckley, who finished his career in 2008 on his 300th bout, for the third time in his career after winning the English super-featherweight title just a few weeks prior.

Billy ‘The Kid’ Corcoran retired in 2007, but his younger brother Gary is about to challenge WBO world welterweight champion and Manny Pacquiao conqueror Jeff Horn in 11 day’s time in Brisbane.

50 miles north up the M1, a young Jamie McDonnell doubled his win tally to 2-0 at the Doncaster Dome, with future promoter Stefy Bull providing chief support.