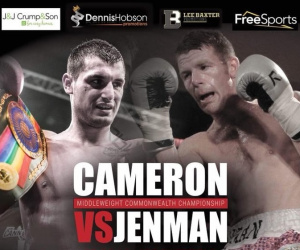 Nicky Jenman: "I’ve nothing to lose and lots to gain"

Can Nicky Jenman cause a shock against Liam Cameron on April 27?  The Brighton fighter certainly believes so.

‘Cannonball’ Cameron seized the crown last October in dramatic fashion, stopping fellow ‘Steel City’ fighter Sam Sheedy in eight action-packed rounds, also in front of the Freesports cameras.  The former ABA champion, 20-5 (8), and his team, are now looking to push on and hopeful that a successful first defence of the Commonwealth belt will open up other title opportunities.

Southpaw Jenman, in action late March when losing an IBO Continental Middleweight Title bout to Andrew Robinson by majority decision, insists he will be in good nick on fight night.  The 32-year-old, may have lost 10 of 31 outings, but says he will thrive having no pressure on his shoulders and warns he has good ‘away’ form on his ledger.

“I’m absolutely over the moon to get this opportunity,” said Jenman, who works full time as a scaffolder but begins his day with a 4am training run.  “From my last fight against Andrew Robinson, which I thought I did enough to win, I didn’t think I’d be back in the mix.  So, this is a really good opportunity for me to take.

“After the Robinson fight, I was back in the gym the next day, and I’m always in the gym all year round.  So, when I got the call for this fight with just a few weeks notice, I thought I’d grab it.

“I haven’t really seen much of Liam.  Obviously, I’ve heard of him but I’ve not seen him fight.  He’s a tough lad and he’s the champion, so I respect him for that but I want to do my best and cause the upset.  I leave my opponents to my management team; I never watched one of Andrew Robinson’s fights, my team came up with a game plan and I thought I won that night.  So, we’ll have a good game plan for Liam.

“I’m fine about fighting in Sheffield.  I’ve caused upsets away from home.  And sometimes it’s nice not to have the pressure [of fighting at home].  I’m the away fighter, they’re expecting me to lose but my attitude is that I’ve nothing to lose and lots to gain.  Don’t get me wrong, he’s a tough lad and a champion but I’m in the wrong game if I’m going to there to make up the numbers.  I’ll put on a good show and want to cause the upset.”

The show will be broadcast live on Freesports.  For more information visit www.freesports.tv

Carl Frampton: Nonito Donaire is my most illustrious opponent

Tommy Coyle: "This is the relaunch of me and I'll have that title around my waist"