It’s the Lion versus the White Rhino as heavyweights Nick Webb (12-0) and Dave Allen (13-4-2) clash on the Dillian Whyte vs Joseph Parker PPV event at the O2 Arena on July 28, live on Sky Sports Box Office.

Tim Rickson of BBN attempts to break down the tantalising heavyweight battle that sees one fighter step up in levels against another that has a limited skillset but far greater experience.

Doncaster’s Dave Allen, 26, has the upper hand in experience having fought for the WBC International belt against Dillian Whyte and the Commonwealth title twice against Lenroy Thomas.

He has boxed three times the number of professional rounds than his opponent, equaling to almost four hours of ring time compared to Webb’s one hour of action.

There’s a reason that Webb has only experienced 26 rounds as a pro and that’s because he is a fearsome puncher. His 12 fights have been scheduled for 52 rounds in total, but the heavy-handed heavyweight has only had to complete half of those with 10 knockouts to his name, scoring five consecutive first-round KO’s in his debut year. 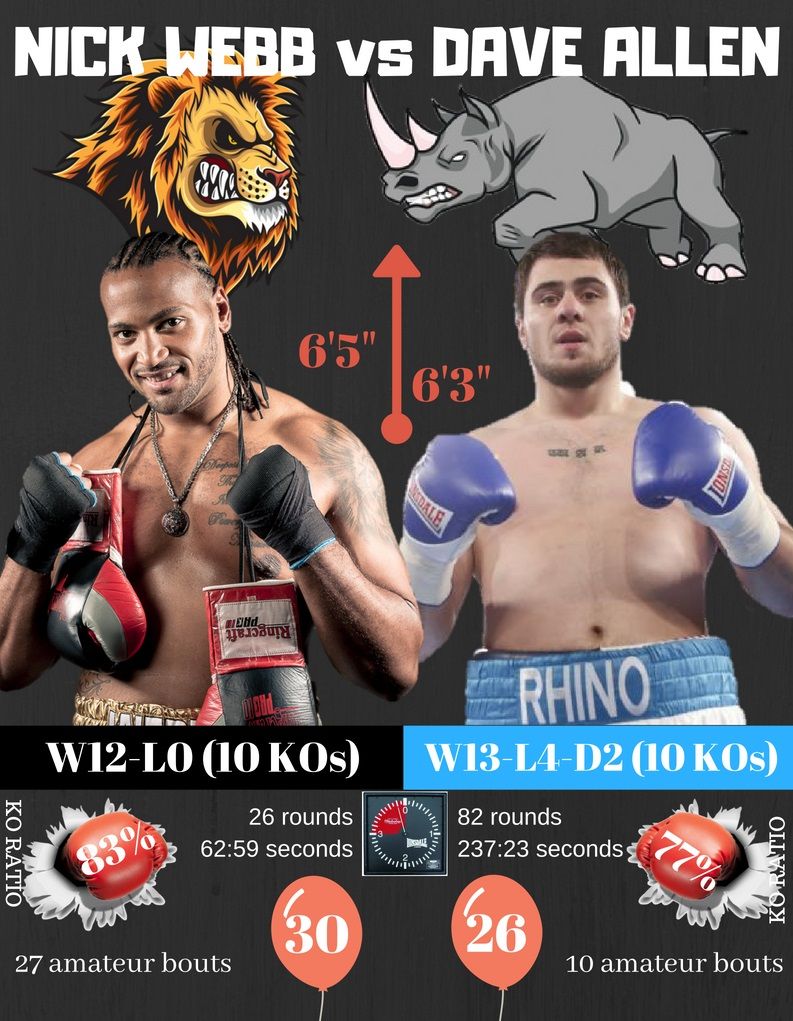 As an amateur, Webb took up the sport late, in his 20’s, but raced to 21 wins from 27 bouts, reaching the finals of the ABA’s every year from 2011-2014. He won the Novices in 2012 after finishing runners-up the year before, then met Joe Joyce in the Elites finals in 2013 and the semi’s in 2014, losing out to the more experienced Team GB boxer both times.

Allen, too, had a short but productive amateur career, winning the national boys club title and the Yorkshire ABA’s in under 10 fights. Two-time ABA champ Simon Barclay [now a 10-3 English title contender] proved to be his nemesis when he lost by two points on the old scoring system, 19-17, in their ABA fight, which also ended his association with the unpaid code as he turned over aged just 20.

Webb’s opponents have not been of a good standard, as their combined records of 109-193-15 suggest. He has only fought one winning fighter in his career and his toughest opponent to date has been Prizefighter finalist Hari Miles (9-9), who he defeated 40-37 on points.

It’s difficult to gauge Webb’s prowess against weakened competition, but his amateur rivalry and close fights with current Commonwealth heavyweight champion Joe Joyce is a strong indicator of where he stands, and he would’ve only improved since then.

Allen has fought opponents with an impressive record of 227-179-12 and not only were 12 of those winning fighters but two of those were unbeaten and one went on to fight for a world title.

Both boxers have 10 KO’s on their record, Webb from 12 wins, Allen from 13. Webb does have the edge in power but only by a few per cent.

Where they differ in strength is that Webb has one-punch power and can blast his opponents away with just one clean connection, which is why half of his wins have come via first-round knockout.

Webb is unbeaten but also untested, whereas Allen has mixed it with the world’s best and proved he is champion material with his narrow loss to Thomas for the Commonwealth.

Webb will have the confidence of a fighter that is unbeaten in 12 fights and the heart of contender that has frustratingly failed to get title fights despite signing contracts for the English and Commonwealth against Nathan Gorman and Joe Joyce respectively.

He believes in his talent which is backed up by his willingness to face unbeaten champions Gorman and Joyce as well as Daniel Dubois.

Allen comes into this fight a little confused, having spoken about having a break from boxing for a while then signing up to fight Webb at the very last minute without adequate time to prepare fully. He has spoken – perhaps in jest, as he often does on Twitter – about his poor diet of takeaways and fizzy drinks and only having one or two gym sessions prior to this bout. He also called this fight, “one last roll of the dice”, which doesn’t sound like the words of an ambitious, hungry champion. 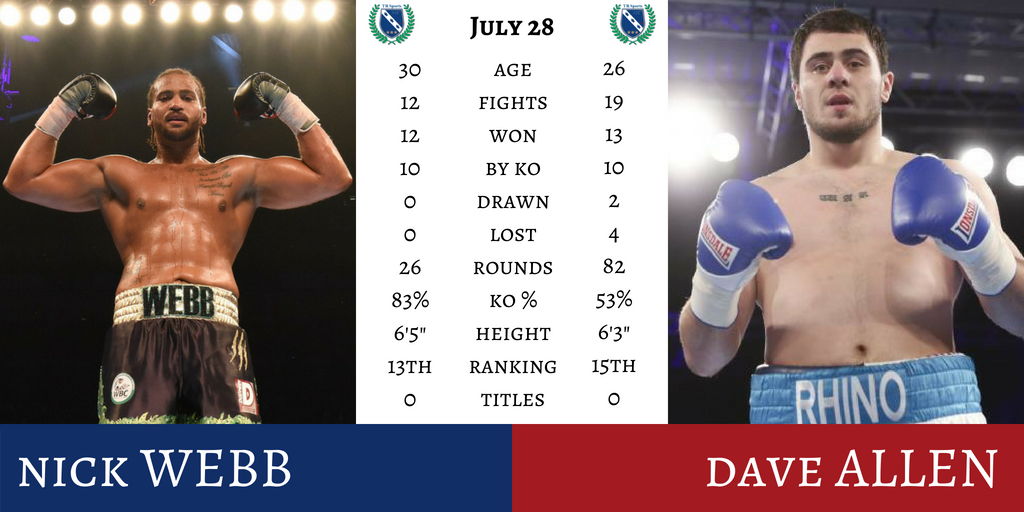 Their clash of styles should ensure fireworks that will unquestionably light up the Greenwich Peninsula and give the grumbling fight fans their money’s worth on a PPV card catastrophically beset with cancellations and critique.

Having only ever been as far as six-rounds in his three-and-a-half career, the Surrey sports star will want to try to finish this inside the distance – his power has the potential to do this.

Allen could win by taking it to points, having had the experience of going past six-rounds a half-dozen times before. He is tough, durable and has plenty of heart which is why his only two stoppage defeats have come in the last round against Tony Yoka and the penultimate round against world title challenger Luis Ortiz.

Webb’s confidence, power and momentum should edge Allen’s heart and bravery in this British title eliminator to win by KO in the middle rounds.

The winner will then meet British heavyweight titlist Hughie Fury next.