The Chertsey banger was floored by an overhand right in the fourth segment despite taking the lead on the scorecards at the O2 Arena in south London.

For the first time since fight night, Webb spoke out on the downfall, exclusively to BBN, “Obviously, I was gutted after the fight, but it is what it is, I just got caught hard in the temple and that’s what happens in the heavyweight division, a hard lesson learned, I got too comfortable in there.”

He continued to say, “I have never been put down by a shot before, even in sparring, so it was a brand-new experience and I won’t let that happen again. It’s a hard pill to swallow because I feel I was winning the fight easy, just with boxing skill, but got lazy with my hands and legs, and that’s what happens.”

The 30-year-old, managed by Scott Welch, was in control of the fight, using his jab to dictate the pace, pecking away at Allen in each round, looking to break him down gradually.

Following his success in the opening round, Webb started to land bigger punches in the second segment, but Allen was also able to land a few back himself. 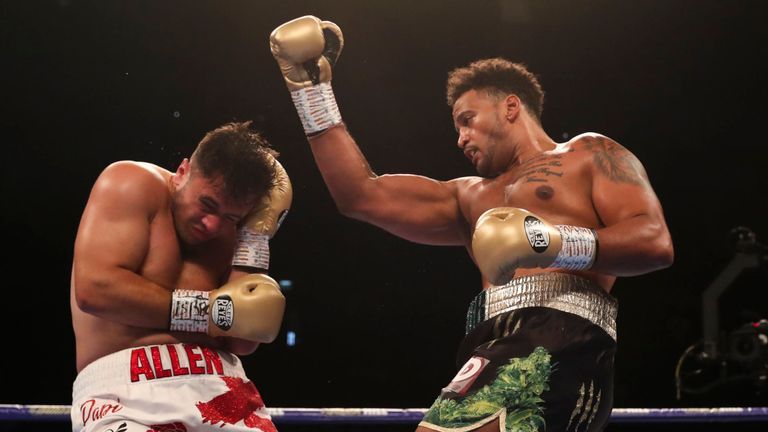 Allen was pushing forward and never stopped coming, as is his custom, but was absorbing a lot of punishment along the way.

In the fourth round, however, there was a sudden turn of events as the Conisbrough puncher landed a big right hand that sent a stunned Webb stumbling backwards. Moments later, Allen threw a left hook to the body followed by a thunderous overhand right that sent Webb crashing to the canvas for the first time in his career.

Post-fight, the consummate professional praised his opponent for “being such a tough, game man,” and thanked promoter Eddie Hearn for the opportunity.

“Fighting on this card was one of the greatest achievements of my life, even though it didn’t go the way I thought it was gonna’ go, it was still amazing.”

Allen came into the British heavyweight title eliminator off the back of a TKO loss at the hands of Olympic gold medal winner Tony Yoka just last June in France, whereas Webb was riding high with a two-round demolition job of Ante Verunica last February on the Lawrence Okolie vs. Isaac Chamberlain at the O2 Arena in London.

“This loss has shown me I’ve still got a lot to work and improve on. This is why boxing is one of the hardest sports, but I shall be back stronger and more focused than ever before.

“If David Allen is willing then I would love the rematch in the near future where me and him can have proper camp and put on a great show, because at our worst we entertained the crowd so at our best we can produce real fireworks and explosions.”