Unbeaten heavyweight Nick Webb (12-0) thought he had landed a dream Commonwealth title shot at Joe Joyce (5-0). The 30-year-old from Chertsey even signed contracts presented to him to commit fully to the fight.

Eddie Hearn had announced in an iFL TV interview that he was planning on setting up a Commonwealth heavyweight title fight between champion Joyce and unbeaten challenger Webb for July 28 on the undercard of Whyte-Parker at The O2.

Webb, 30, trained by John Edwards at Guildford City Gym, immediately accepted the opportunity to fight for his first professional title until he was left disappointed by the ‘Juggernaught’s’ statement released on social media shortly after rumours began circulating: “To be clear: I was never scheduled to fight this month. I was alerted by my promoter when I got back from holiday a few days ago that there could be a potential fight against Nick Webb on July 28th. As it stands I don’t have a trainer, as he [Ismael Salas] has now moved to Doha and moved into semi-retirement. I will announce my new trainer in due course. I will fight any heavyweight in the world with notice let alone Nick Webb who my team have previously offered the fight to twice. I will happily fight Nick in September, so if Eddie [Hearn] wants to put it on the AJ undercard, I will be more than ready.”

The David Haye protégé destroyed Caribbean southpaw Lenroy Thomas (22-4-1) inside two-rounds on May 5 to land the vacant Commonwealth crown whilst dressed as a Mexican with a sombrero on his head to celebrate Cinco de Mayo.

Webb and Joyce have a long history of meeting in ABA finals as amateurs. Inspired by his grandad, the Surrey star started boxing late, aged 20, but quickly raced to a total of 21 wins from 27 amateur fights, reaching the Novices finals in 2011 and winning it in the following year in 2012. In 2013, he met Joyce in the Elites finals and then again in the semi-finals the following year, tasting defeat both times at the hands of the more experienced Team GB boxer.

Joyce, too, started boxing late, aged 22. The Putney puncher, now 32, won Commonwealth gold in 2014 in Glasgow, followed by a silver medal at the Rio 2016 Olympics, then turned pro with Hayemaker Ringstar in July 2017.

It was after the 2014 ABA semi-finals when Webb turned over having not been selected for the Team GB squad despite trialing on three occasions. He signed professional contracts with Hall of Fame promoter Frank Warren, a partnership which only lasted a year, debuting at the York Hall in March 2015 and scoring a 56-second knockout in front of the Box Nation cameras.

As a free agent he has taken full advantage of the independence by appearing on Hayemaker Promotions, Cyclone Promotions, Hennessey Sports and Matchroom Boxing events and was last seen in action on February 3 on the Lawrence Okolie v Isaac Chamberlain undercard at the O2 Arena in London when Webb blasted his Croatian counterpart away in the last 15 seconds of the second-round.

Webb’s forthcoming title opportunity was meant to put a frustrating 2017 behind him, a year that saw potential championship contests with Nathan Gorman and Daniel Dubois both disappear. ‘Wild’ Webb was made the mandatory challenger to fight for the vacant English heavyweight title against Nathan Gorman (12-0), only for the 21-year-old to pull out and face Mohamed Soltby (13-0) for the WBC International Silver belt instead, which he won via fifth-round TKO.

An ensuing injury then saw Webb’s potential championship opportunities with Daniel Dubois (7-0) evaporate while he was sat on the side-lines during recovery.

Despite still having the English championship in his sights, Webb signed contracts for a crack at the ‘Juggernaught’s’ Commonwealth crown as soon as it was offered but has once more tasted disappointment.

In the unpaid code, Joyce was always just ahead of Webb in experience but, as pros, the 12-0 prospect now has the advantage over his old enemy with double the rounds under his belt – 26 to Joyce’s 13 – making an upcoming clash a tantalising fight for fans. 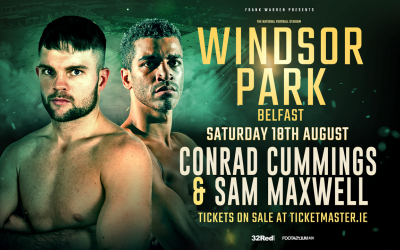