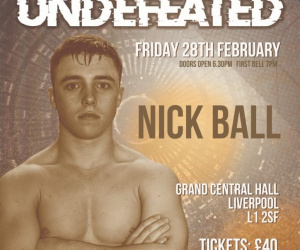 School's out for Nick Ball

Unbeaten super-featherweight Nick Ball moved up to 11-0 with a blistering second-round stoppage win in front of Hall of Fame promoter Frank Warren and Tyson Fury in his last fight in November.

The 22-year-old talent dispatched of tough Nicaraguan Johnson Tellez (10-49-5) inside two rounds, flooring him in the first then stepping it up in the second to finish him off.

It led to Ball, along with two of his teammates, Bradley Strand and Andrew Cain, signing promotional contracts with Warren.

He recounted what happened after notching up his fifth career KO, “It was good to see Frank up close and to box in front of him. I went and saw him after the fight and he was made up with it and said that it was outstanding. Tyson Fury shook my hand and said, ‘You should be proud of yourself’, so I was made up with that.”

Ball’s next fight is on February 28 at the Liverpool Grand Central Hall, where he will fight alongside seven unbeaten stablemates from the Everton Red Triangle gym. He will be topping the Black Flash Promotions bill, titled ‘Undefeated’, in a six-rounder with the opponent yet to be confirmed.

A former Junior ABA champion, trained by Paul Stevenson, Ball possesses an exciting style that pleases the crowds, “Just want to get straight to it, I’m all action but I can box as well,” he explained. “I like being sharp, fast, strong, and keep coming forward. I try to not to take one and be clever with it, but I just want to get the job done.”

Now 11 fights into his career, mostly facing journeymen, one of which was a Dutch national champion and another an Olympian, Ball believes his apprenticeship has now been served.

“Yeah, I’m done with that, you’re always still learning with every fight, but I want some real step ups now and get some titles behind me – English, British, anything, get them all!”

The Black Flash Promotions shows, of which there are at least five per year in Liverpool, are popular events quickly becoming known for showcasing exciting fights.

Head coach Paul Stevenson believes in training his fighters in educated brutality, where they showcase their skills and boxing backgrounds, but also come forward to get the job done and win in sensational style. It’s a formula proving to be successful with the spectators.

“You’ve got to make it happen, it’s up to the boxers to make people get up and want to come out and watch, you’ve got to be known and popular and sell a lot of tickets because that’s a massive part of boxing. If you can sell tickets and your style’s exciting, then I don’t see why people wouldn’t want to come and watch,” Ball enthused.

“The likes of us, we’ve just signed with Frank [Warren], three of us, we’re from Liverpool and have all got exciting styles. We need to bring the shows back and all be on them shows together like at the Echo Arena, that would be good.”

“I can’t wait for these lads to get on a Frank Warren show, so the public at large get to see what I’m talking about.”

Frank Warren’s other two signings, super-bantamweight Bradley Strand (2-0) and featherweight Andrew Cain (4-0) will both join Ball on the talent-rich card.

23-year-old Cain enters into his first six-rounder after stopping all four of his opponents so far, and 22-year-old Strand will have another four-round contest.

The group of eight fighters from the Everton Red Triangle, who are undefeated in 30 fights between them, will be supported by super-middleweight southpaw James Heneghan (3-0); super-lightweight Michael Hedges (2-0); David Thompson (1-0), and hard-hitting heavyweight Karl Tierney (1-0).