He knocked ‘The Medway Mauler’ down in the opening round, who then rallied back strongly with a busy, pressurised performance, but the eye-catching power punches kept landing regularly from Crocker, who eventually finished the fight off in the seventh, causing bad swelling to his opponent’s left eye, winning his first ever professional title.

It was great preparation for the Irishman, who has now defeated five winning fighters in a row, which includes British title contender John Thain (17-5, 1KO), as well as a French champion and two Southern Area champions.

The 24-year-old Belfast boxer seems to be moving up in levels at the very right time and pace and is now coming into a contest for the first time as a competent, confident defending champion.

In the amateurs, he won 90 from 97 bouts, winning seven All-Ireland titles and a bronze medal in European Schoolboys in 2011. He is famed for scoring the quickest knockout in Irish amateur boxing history with his 12 seconds win in 2015.

He has clearly carried his skill, power, and winning ways into the paid circuit, after all those years punching bags as a kid, and is still just 24-years-old.

His 13th opponent, Deniz Ralf Ilbay has the upper hand in experience, with double the bouts, having first turned pro in 2011, closing in on a decade as a pro fighter, but still just 26-years-old, surprisingly.

The reigning German welterweight champion has won GBC Youth; IBO World Youth; WBO Youth; IBF Youth; WBF World; and GBU World titles, which is quite a collection so far, but lacking substance. Half of those titles are unheard of and the governing bodies that are recognisable are still only ‘Youth’ titles, which don’t carry a great deal of prestige. For example, the IBF Youth belt he won in 2015 has been in existence for 16 years but not one holder has ever gone on to win or even challenge for a world title.

When the Cologne combatant challenged for the IBO Inter-Continental welterweight title in his penultimate fight, he came up slightly short, losing by a split decision to South American champ, Jonathan Jose Eniz (25-15-1, 10KOs).

Ilbay looks good on paper, with six titles and 22 wins from 24 bouts, and he backs those impressive stats up in the ring. In his first big step-up in levels, he took future world title contender Egidijus Kavaliauskas (22-1-1, 18KOs) the distance over eight rounds in his first fight outside of Europe, held at the MGM Grand in Vegas on the undercard of Manny Pacquiao vs Tim Bradley Jr. 2.

He has a sharp jab and knows his way around the ring. He has never been stopped and took some hard shots from the powerful Kavaliauskas, who had 11 knockouts from 12 wins at the time, so his chin and bravery has been questioned and answered. He even ended that points defeat throwing flurries on the front foot despite being marked up in the face and down all eight rounds on the scorecards.

Crocker is so sharp and elusive, with such smooth head movement from so many years as an amateur, that it’s hard to see Ilbay, despite his capability and experience, getting close enough to land his shots cleanly against a man so much taller than him.

It all depends how the fight plays out. You would expect Ilbay to come forward while Crocker opts to go on the backfoot, like he did against Greene. Ilbay will inevitably land counterpunches, but ‘The Croc’ should be able to dodge most attacks whilst whipping in those rangy shots.

Ilbay is an established pro at his weight, but Crocker has the pedigree here. My prediction is a skilful points win from Crocker.

Ireland’s Cully is another product of the island’s thriving amateur scene, having won six national titles, European Youth gold, as well as winning the gold medal at the Haringey Box Cup in 2016, where he was also declared the best overall boxer of the London tournament.

Trained by Pete Taylor, the 6’ 2” southpaw has already replicated that amateur success when he became a national champion in his 10th contest against 10-0 Joe Fitzpatrick from Belfast. The pair put on a scintillating show despite it only lasting a minute and a half. Cully hurt ‘The Dragon’ with his long, rangy punches and finished the fight clinically to become the 19th Irish lightweight champion in history.

In his last contest with Craig Woodruff (10-5, 4KOs), who replaced the original opponent Kieran Gething after he suffered an elbow injury which later required surgery, he was forced to dig deep to salvage a win after finding himself on the canvas in the fifth round.

‘The Diva’ was boxing well, landing a lovely backhand in the round four, shortly before he lapsed in concentration, overreached with a left hand and got floored with a Woodruff right. He looked hurt and was forced to hold for the following few moments, but actually finished the last minute strongly.

He has since promised never to allow that to happen again and is looking ahead to winning world titles in his career.

Similarly to his MTK Global stablemate and event co-star, Cully has won his last five fights against winning fighters and Viktor Kotochigov represents another sensible step-up and test.

The Kazakh was upset by in-form Maxi Hughes (22-5-2, 4KOs) in his last fight five months ago, losing his WBC International lightweight title in the process.

Up to that point, the 27-year-old had defeated 10 winning fighters and two debutants until the Brit spoiled the party with his unanimous points win.

There’s only ever been eight WBO European lightweight champions since the title’s inception in 2010, which includes British champion and world title contender Liam Walsh, who held the title twice, and world champions Eduard Troyanovsky and Terry Flanagan.

Cully has the home advantage in Bolton, but without a crowd, that becomes nullified somewhat. Both boxers possess a decent amateur pedigree, although Cully's experience and accolades eclipses Koto's achievements somewhat.

If Cully can stay switched on, not leaving his head exposed for too long like he did before, then he should dance and jab his way to a points win. 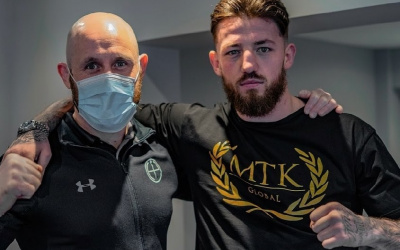