MTK Global Vice-President Jamie Conlan has urged boxers to try to stay positive following the announcement by the British Boxing Board of Control that boxing in January will be unable to take place.

The BBBofC announced on Sunday that all boxing events throughout January have had to be cancelled due to the increase in COVID-19 cases in the United Kingdom and the effects such increases has on the NHS and the work of the Board Medical Officers.

It meant that the planned MTK Fight Night event on January 22 can not take place, which featured Karim Guerfi vs. Lee McGregor for the European bantamweight title, along with fights such as Sean McComb vs. Gavin Gwynne for the vacant Commonwealth lightweight title.

Conlan has provided an update on how things have unfolded behind the scenes over the last 24 hours, and hopes to have news soon on when the fights can be scheduled.

He said: “Following the announcement from the BBBofC that they’re cancelling all boxing throughout the month of January and our January 22 show, my thoughts are initially with the fighters. I know it’s very tough to remain positive, but remain positive because the team is working behind the scenes on a contingency plan to reschedule the show.

“It was one of the best shows in the first quarter of 2021, and was a real statement of intent from Lee McGregor to be challenging for the European title against Karim Guerfi.

“Sean McComb was having his first major step up in a Commonwealth title fight against Gavin Gwynne too, so that was a fantastic test. We then had the likes of Pierce O’Leary, Hassan Azim and Paddy Donovan all scheduled, so stay positive on this. We will be working countless hours to make sure we have a date as soon as possible for everybody involved.”

The aforementioned Lee McGregor is also trying to stay positive after the recent news that his fight with Karim Guerfi would have to be postponed.

McGregor said: “I’m trying to stay positive because I’m seeing how I’m progressing in the gym. The fight being postponed in November the first time was a blessing, because of how I’ve been performing over the last few weeks.

“There are big improvements being made, and as much as it is frustrating and I’m gutted, I firmly believe I’ll become European champion when I face Guerfi. I just want to get in there and punch him in the face.

“This is a cracking fight and everybody wants to see it, so this is just delaying the inevitable for me. It will all be worth it when I eventually get to step through those ropes.

“If all went to plan I think I’d go in there and dominate him and look like the experienced fighter. People will see that I’m well beyond the fights I’ve had, so my main focus is getting this fight on as soon as possible.”

The BBBofC are set to make a further ruling and statement for February. 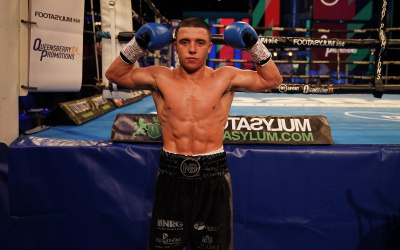