Michael Conlan believes his move to train under decorated coach Adam Booth will help him kick on in the pro ranks as the former world amateur champion prepares for his next St Patrick’s Day bout in New York.

MTK Global-managed Conlan today (Wednesday) revealed that he will be based in London, training under renowned coach Booth, after deciding to leave Los Angeles.

> The 26-year-old Belfast native had originally started his paid career training under Manny Robles in the Rock Gym in Carson, California, moving across the Atlantic to the US west coast where he built a 5-0 pro record following his successful debut in New York last year.

Nearly a year on from that first pro fight, Conlan (5-0, 4KOs) has opted to switch to London in order to be based closer to his Belfast home and family.

The Irishman will continue to have MTK Global in his corner, along with US promotional giants Top Rank, and he will be back at Madison Square Garden’s Theater for his sixth paid outing on March 17 where Booth will be in his corner.

“I’m really excited about the move,” said Conlan, who has been testing the waters with Booth over the past week before announcing his move. “It’s one I took a lot of time to think about, but I knew if I was moving closer to home that I wanted to link up with Adam.

“I’d like to thank Manny for all his help. I really enjoyed the time we spent working together and I learned a lot, it was a great experience, but I just felt I needed a change and it was important to be training closer to home for my family.

“We have another baby on the way and I think this will make life a lot easier both personally and professionally.

“I was moving towards more of a Mexican style and I think Adam Booth probably suits my natural style so I’m looking forward to getting ready to fight.

“I think working with Adam will help me develop, but I’ll also be able to get back to what I do best and concentrate on my boxing skills,” added the London 2012 Olympic medallist.

The MTK Global-backed fighter feels the move is already paying dividends as he adapts to training under Booth, who has previously coached David Haye, Andy Lee and Burnett to world titles.

“I’m really happy with how things have gone so far,” said Conlan. “I feel like I’ve got a good bond with Adam and the lads in the gym too. I’ve really clicked with them and I’m really looking forward to getting things going and working towards Paddy’s Day in New York.

“I see the bond Adam has with his fighters. That’s something that I felt was probably missing for me and it’s one of the main reasons I came here,” added Conlan. 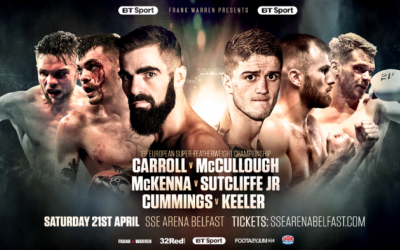