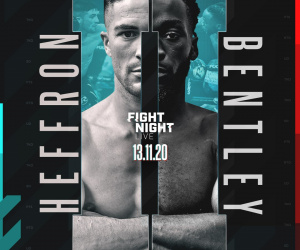 Queensberry Promotions today confirmed the return of Friday night fights to BT Sport on November 13th with the announcement of the highly anticipated rematch between British Middleweight standouts Mark Heffron and Denzel Bentley.

The BBBofC have confirmed that the bout will serve as a final eliminator for the British Middleweight title.

UK fans have demanded the domestic duel be rerun ever since their epic September scrap ended with a rare unanimous draw. That wish has now been granted.

BBN Fighter of the Year 2020 Awards

Whilst the first fight was arguably the highlight of all post-lockdown boxing, fans were left crying out for more as the ringside judges couldn’t separate the fighters - all three scoring the bout 95-95.

In the world of social media, neither experts nor fans could unite behind a singler fighter as the rightful winner and, equally, the fighters themselves were both convinced they’d done enough to claim victory.

With no consensus victor from punters, pundits and fighters alike, Frank Warren has taken the only course of action that made sense and booked the rematch.

“The British fans wanted it, so we’ve delivered it” said Warren, adding “it was the easiest decision in the world to put these two back in the ring together.”

“The response to the first fight was overwhelmingly positive. Fans up and down the country were hailing the fight as the best domestic Middleweight scrap in years. With no clear winner, the only thing to do was book an immediate rematch and let these two finally settle the debate once and for all.

“I had the first fight a draw, honestly. I thought Mark was all action and came forward well, but Denzel boxed tremendously, showed great movement and picked his shots intelligently. Denzel scored a big knockdown early, but got hurt himself in the later rounds.

“It’s only right that the fight is an eliminator for the British title. The winner of this will go on and achieve great things.

“This rematch is such a great fight for British boxing fans, and I couldn’t begin to pick a winner. I reckon the bookies are going to struggle to separate them too - it’s the definition of a 50-50 fight.”

Mark Heffron (25-1-1, 19KO’s) said: “I’m so pleased that this rematch has been arranged and I'm back in the ring so quick. You will see a sharper Mark Heffron this time. I know I won the first fight, but in this second one I’m planning on leaving no doubt.”

Denzel Bentley (13-0-1, 11KO’s) said: “Thanks to Frank for getting the rematch on for us straight away and giving me another chance to show the world why I’m the future of this division.”

It was also confirmed that Tommy Fury will return to action on the undercard. Tyson’s younger brother was last seen in action on December 21, and will be looking for another first round stoppage in the Light Heavyweight division. Opponent TBC.