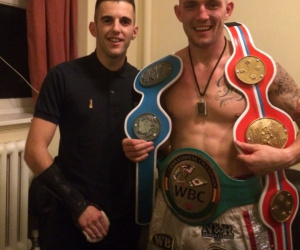 LUKE Blackledge became the first boxer in almost 50 years to wear a professional belt in a Blackburn ring as he capped a fabulous night by being crowned as the WBC International Silver super-middleweight champion.

The Accrington 24-year-old completely dismantled tough Ghanaian Philip Kotey in front of a packed King George’s Hall crowd to take the next step up the ladder with bigger and better things now surely around the corner. On the night the professional sport returned to Blackburn for the first time since the 1960s it was fitting that a local boy was the star of the show to send 1,600 fight fans home happy.

In truth, the result was never in doubt and after an even opening round Blackledge was a class above Kotey.

The man from Accra arrived in England boasting more knockout wins – 22 – than Blackledge has had fights. But Kotey, who is nicknamed Sweet Pea and at 32, eight years older than Blackledge, was never at the races. As the rounds ticked by it was like shelling peas for Blackledge. By the fourth round it looked as there would only be one result with Kotey unable to break down the Blackledge defences and a round later the local star was growing frustrated. “You’re trying too hard, keep working him” was the message from Blackledge’s corner when their man was going all out for the spectacular. He listened and carried out his pre-fight promise to outbox Kotey, who by round seven needed a knockout to have any chance of taking the strap back to Africa.

That was never on the cards as Blackledge eased through and when the final bell went even Kotey seemed to acknowledge defeat. That was confirmed soon enough as WBC judges Alvin Finch, Shaun Messer and Mark Lyson all scored the contest 100-91 in favour of a beaming Blackledge.

The capacity 1,600 crowd was left stunned earlier in the night when Oswaldtwistle’s promising heavyweight Adam Machaj was beaten.

Machaj, whose explosive knockouts in three of his previous four pro contests had got the boxing world talking, never looked at ease against debutant Kamil Sokolowski.

The Plymouth-based Pole had done his home work on Machaj and despite giving away six inches and more than a stone to the local, was the dominant force.

He got in tight and tied up Machaj’s hands and took the four-round contest 39-38 to the delight of his one fan in the crowd.

The fight of the night saw 18-year-old Blackburn boy Morgan Jackson make a thrilling debut as he beat Robert Studzinski despite being knocked down in the final round.

It was close to the perfect start for Jackson and referee Finch looked long and hard midway through the first as Studzinski was pinned to the ropes and taking a pounding from the young middleweight. Jackson was cut in the second as Studzinski, a Polish brawler based in the Welsh Valleys, tried to battle back by way of a head butt and a late blow. But he continued to take the fight to his rival and even the left cut that sent Jackson briefly to the canvas couldn’t change the result.

And it was also a big night for Lower Darwen’s Afghan AJ Faizy who brought the hall to its feet with a thrilling show against Gillingham’s Mick Mills.

Faizy was quick out of the blocks and caught Mills with a massive right in the first minute. It rocked Mills with the shockwaves running through to his toes but somehow he stayed on his feet and brawled his way out of trouble. At the end of the first Faizy thought he had his man again but Mills – a real fighter with no frills but the heart of a lion – got through to the bell. The second round followed a similar pattern but Mills landed his own big shot that tested Faizy’s jaw before the third round exploded. Faizy prowled the ring and forced Mills into a neutral corner before launching into his final assault. Referee Lyson let it go on for perhaps 20 seconds too long before stepping in after two minutes and 39 seconds. And the applause for both fighters said it all.

Welterweight Qasim Niaz also proved his credentials with a good show to beat Duane Greene of Norwich on points. Greene was gritty and prepared to take the fight to the well-supported Blackburn star in the making but Niaz was a class apart and moved round the ring well to totally contol the fight with the decision a formality.

Darwen cruiserweight Stevie Taylor made it six wins from six as he had far too much class for Lincoln’s Mitch Mitchell, while Blackburn welterweight Derrick Grieve drew on debut with Manchester pocket rocket Dee Mitchell.

Nelson’s Atif Mushtaq, with Ensley Bingham and Carl Thompson in his corner, turned in a good display to beat Kristian Laight in a light-welterweight contest over four rounds, while Blackburn’s Ali Shah claimed a points win over Nottingham’s Simone Lucas. But that welterweight contest could have gone either way with Shah perhaps a tad fortunate to take the decision against an opponent who worked harder throughout the four rounds. There was a draw for Kurt Grieve, while super-featherweight Artif Ali made it four wins from four fights against Joe Beedon.