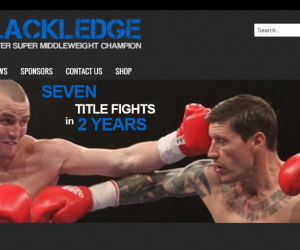 WBC International Silver super middleweight champion, Luke Blackledge launched a new website to keep up with demand from fans following his record breaking feat as he became the first boxer in almost 50 years to wear a professional belt in a Blackburn ring.

The Accrington 24-year-old completely dismantled tough Ghanaian, Philip Kotey in front of a packed King George’s Hall last September and returns to the same venue to defend the honours on 22nd November. The response from fans, sponsors and the media was at such a level that the former Commonwealth challenger decided to create a website as an information hub to keep up with the increase in demands. SAGraphics, a family-run web and graphic design company based on the border of Lancashire and North Yorkshire decided to undertake the project and delivered the goods in just under two short weeks.

Sarah Greenwood, Technical Director from SAGraphics stated, "We are very excited by the opportunity to sponsor a local rising champion.  It was great fun building the website for Luke, and we hope his fans enjoy it.  We're certainly looking forward to watching the big fight on the 22nd."

Jimmy Kelly faces Luke Blackledge in his next fight

The website features up-to-date news, videos, images and a shop for fans to purchase tickets and merchandise.

Visit the website here www.lukeblackledge.co.uk The two-weight champion commented on his new website, "It looks fantastic so I'm really pleased with it. Thanks to SAGraphics, they did a brilliant job, couldn't have asked for more."

Luke Blackledge will enter into his seventh title fight in under two years when he defends his recently attained WBC International Silver super middleweight title in Blackburn on November 22nd despite still being without an opponent just two weeks away from fight night. Originally, the 24-year-old, Luke Blackledge 17(6)-2(1)-2 was due to fight British Masters super middleweight champion, Jahmaine Smyle 11(5)-4(2)-2 for the vacant English super-middleweight title.

Blackledge even made this statement on Facebook, “Just got the tickets for my next fight at King Georges Hall, hopefully going to be another sell-out, I will be boxing Jahmaine Smyle in a 10 round title fight.” Clitheroe boxer, Luke Blackledge was then given a sniff at the Commonwealth title at super-middleweight and was waiting on the Commonwealth Boxing Council to ratify his second title shot.

Blackledge, with just three days notice, fought Rocky Fielding in November 2013 for the Commonwealth honours but was counted out by referee Victor Loughlin after two minutes and 32 seconds of the opening round.

Unbeaten Fielding, the newly-crowned WBA Inter-Continental champion after beating Noe Gonzalez Alcoba in July, relinquished the strap earlier in the year after failing to make the weight for his contest with Ghanaian Charles Adamu at Liverpool’s Echo Arena. Adamu, who has shared the ring with Carl Froch before, went the distance with George Groves but lost unanimously on the judge’s scorecards.

Blackledge had high hopes of facing the ‘Crusader’ for the vacant strap at Blackburn King George’s Hall on November 22nd and made this statement at the time, “I could be fighting for the Commonwealth title against Charles Adamu who went the distance with Rocky Fielding. We’ve just got to wait for the Commonwealth to approve the bout. I fought Rocky for it last time and I’ve learnt a lot of lessons from that so hopefully I’ll get another shot at it.”

This opportunity took precedence over the Jahmaine Smyle fight but for reasons unknown, never materialised. The frustrations have not flustered the record-breaking boxing star as he became the first boxer in 50 years to be crowned with a professional title in a Blackburn ring when he defeated Philip Kotey 29(22)-9(4)-2 in front of a capacity crowd last September.

Blackledge remains grateful despite all of the failed promises as he optimistically stated, “I’m in the gym every day and I’m learning and developing all the time so I feel I can make it to the top. It’s my dream to fight for a British or Commonwealth strap and then move on to a world title. I’ve come a long way since competing in unlicensed fights to keep me off the streets. I never thought I’d be in this position. I never even had an amateur career so I’m proud of what I’ve achieved. I’m one of the best super middleweight fighters in Britain now and I’m ranked in the WBC.”

The home fighter returns to the same setting at the St. Georges Hall in Blackburn to enter into his eighth title but disappointingly will not be adding to his growing hoard of awards and just defending his honours instead.

Blackledge concluded with a message for his fans, “I’d like everyone to get behind me on November 22nd and I’ve got a big fan base behind me now so I promise you that I’ll get a on a big TV show soon so that everyone can watch me. I’d also like to thank my manager, Steve Woods for everything that he has done for me.”

Anthony Ogogo is aiming to be the next Ricky Hatton