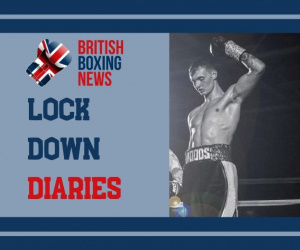 Here’s what the undefeated pro and former England amateur representative had to say:

Have you been training still during lockdown?

“I’ve just been going on a few runs and got kettle bells at home I use, and I’ve done little bit of shadow boxing in the back yard.

When lockdown started, I had a week off before I started training again.

It has been hard though, I haven’t seen much of my grandad, but I speak to him on the phone, but it’s not the same, is it?

Paul [Stevenson] has been checking in to see how we all are, gave us a fight to watch this week in Vitali Klitschko vs Lennox Lewis. Paul’s got really good boxing knowledge and tells us what to look for and implement in our fights. Yeah, I can’t wait to get back in there!”

How difficult is it to train without something to aim for?

“I think you just got to try and stay focused. Everyone is in the same boat aren’t they, just got to stay ready because anything can happen. It’s just how you deal with it, everyone has been dealt with the same hand, just got to play with the cards you’re dealt.”

Do you count yourself lucky to have been one of very few to have fought already this year?

“Yeah, I do, I’m glad I got one in this year, obviously had five dates scheduled for us so the plan has been affected, but I got one in, I suppose.”

How do you handle the disappointment that those five fights aren’t going ahead?

“It’s hard to say really; like I said, everyone is in the same boat, you can’t really get disappointed about it.

When I turned pro I knew it’s an unpredictable sport isn’t it, just anything can happen and you can’t predict a thing, it’s madness isn’t it, just goes to show that you got to be prepared for anything.”

Do you think boxing events will return differently after lockdown ends?

“It’s hard to say, hopefully as soon as it’s back I can get training and get in the gym again, I’m missing the boxing. Hopefully we’ll get it on soon now, the sooner the better, but it’s hard to say, it depends on what’s allowed.

Everyone is in different positions financially; I’m still working, but it’s hard to call how much money people have got to attend a boxing show when this is over, hopefully they’ll all be more inclined to go out and watch.”

When life returns to normal, would ideal your plans be?

“I just want be as busy as possible to get my record up and push towards titles – being active was a big part of that, I just wanna get straight back in there and carry on where I left off.”

You are part of a talented division with Liam Williams leading the way right now – how far away do you believe you are from mixing it with those more established pros?

“I just wanna get my record up and get towards titles as soon as Paul [Stevenson] thinks I’m ready. I don’t feel like I’m in a rush because I’m still learning in the gym. One thing I realised when I joined with Paul is to try and learn as much as I can, but it’s a long career ahead for me, but as soon as Paul thinks I’m ready for title shots then I’ll happily take them.”

Recently signed to Frank Warren, a perfect record with 12 wins and six KOs; is there any pressure to jump into a title fight very soon?

“Definitely, they signed with Frank Warren and it gives everyone in the gym a boost and something for us to work for. It’s been really good for the whole gym.”

Everton Red Triangle Gym, in association with Black Flash Promotions, plan their entire year’s events ahead. Unfortunately, due to the pandemic and subsequent ban on all boxing events under the jurisdiction of the BBBofC, May and July’s events were cancelled. The remaining planned dates are September 5 and November 14.