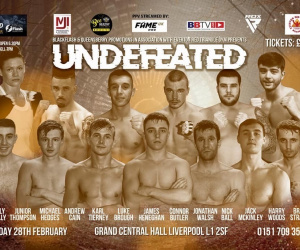 It's one day before the quadrennial Leap Year date of February 29 and there's a group of eight unbeaten prospects from the thriving Everton Red Triangle Gym in Liverpool joined by five more local fighters with perfect records at the Grand Central Hall in Liverpool.

Together, they boast a 56-0 record! BBN reporter Jordan Neild is reporting LIVE from ringside:

Jack 'The Ripper' McKinlay doubled his win tally against a tough opponent. Bit of an unknown opponent with just one fight, but he proved to be very tough, as McKinlay was landing heavy hots, but he wasn't moving anywhere.

Jack was clear winner in a good learning fight.

McKinlay: "There wasn't any feeling out process, the lad came to win and we went at it from the first bell. I landed some solid right hands and I felt my jab was landing well. I hurt my hand in the second round but felt like I was the better technical boxer than him. He tried to put it on me and had a high workrate but I landed the cleaner shots and am happy with m performance. I learnt a lot from that fight."

Heneghan wins on points 40-36. It was a dominant performance against a negative opponent, which frustrated Hedges towards the end.

Walsh moved up to 4-0 with a points win. It was a close decision at 39-38, Adaway would have taught 'Jof' a few lessons in there, which will stand him in good stead going forward.

It was a tough fight, but Walsh did just enough in the end. 'Jof' won the first couple of rounds with ease but switched off in the third momentarily and had to battle hard in the final round to grab the win.

Another negative fight with the home fighter emerging victorioius on points.

Woods was subject to a late replacement on the morning of the fight, a very experienced opponent stepped in. Woods was able to practise a few moves in the four-rounder and improved his game to win on points.

Hedges was the only one not to win his fight, not performing well enough and had to settle for a draw.

Fidoe was perhaps the strongest away fighter on the show, but Butler boxed classy to win on points. He showed a maturity beyond his 22 years to deal with a live opponent who clearly came to win.

Another stand-in opponent stepped in last minute to replace Ed Bjorkland. Strand won on points but with another round, he would have very likely scored a stoppage. One of the standout performances of the night.

Cain was brilliant and lit the hall up with his first round KO. Brilliant combinations and accuracy, the opponent had his guard up high, but it didn't matter. Cain smashed through hs guard with ease and now has five KO's from five fights! No wonder Frank Warren rushed to get his signature just last month.

It was all over in the first round as JJ Metcalf moved up to 21-0. Good start from the Commonwealth super-welterweight champion, landing heavily to cause Balog to not come back out for the second round.

The 'Wrecking Ball' ploughed through his opponent in just one round in a very one-sided affair. After recently signing contracts with Hall of Fame promoter Frank Warren, Nick Ball came out explosively with right hooks, left hooks, devastating combinations to smash Godor all around the ring. The Slovakian 'Dragon' was looking worn after just three minutes and decided he didn't want anymore and retired on his stool.

Everton Red Triangle head coach Paul Stevenson praised his stable of talented fighters after the show, "It was a great show, great venu, great atmosphere, the crowd were on their feet, and it finished with a bang! All the fighters showed improvements, they managed to put into practise things worked on in the gym, so it wa great to see the improvements.