Smith vs Eggington and undercard quotes from the January 23 press conference
Super-welterweights clash on March 30 at the M&S Bank Arena
Fowler vs Fitzgerald, Hughes vs. Davies Jnr and David Price feature on stacked bill

Eddie Hearn:
“Wow - what a turnout. I love this place. Liverpool is so unique. I don’t get as many boos here as I do in most cities! We’re delighted to be here. I never thought that I’d sit next to this man on my right (Liam Smith). We’ve wanted him for about three or four years but finally Liam is where he should be, with us at Matchroom and Sky. We’re delighted to announce a major show on March 30th at the M&S Bank Arena. I think this is one of the best cards we’ve put on in Liverpool for a long time. Three really good Championship fights on the top table. It's going to be a great night."

Liam Smith - Liverpool, England - 26-2-1, 14 KO's – fighting Sam Eggington in a Super-Welterweight contest:
"I'm in a vital part of my career now. I think Sam is a good opponent to get started. I wouldn't want a big southpaw coming for my first fight under you. I've got to put in a performance that makes you think you're right in signing me at this stage.

"On that note, I feel it's a bad part of Sam to take the fight at this moment."

On the Canelo and Munguia defeats:
"Those two fights, proper like night and day for me. Obviously the 'Canelo' fight, we all know how good he is - he was one, two, three steps ahead of me, everything I tried, but I'll stay in there and tough it out with anyone, if necessary, if I can do.

"The Munguia fight, I feel the momentum killed me. I had one fight in 10 months. He had five fights in 2018. In that fight, he was very, very green, and he wasn't experienced.

"Things that I could try early doors were just coming off, and then obviously he kicked in and I started to fade towards the back end, he didn't.

"That's a fight I would definitely love again down the line with momentum. That's a big part of signing for Matchroom. I feel they've got the dates, enough pull around the world to keep me busy."

Sam Eggington - Stourbridge, England - 23-5, 15 KO's – fighting Liam Smith in a Super-Welterweight contest:
"I'm buzzing with this fight, I didn't expect any sort of fight like this, to get someone like Liam Smith, a former World Champion.

"Like you say, I haven't got no pressure, I'm just going to put the work in, and come up on the blind side and get a win that no-one is going to expect.

"They've always been good, competitive spars. Probably could have sold tickets for a few of them on their own, so come March 30, it will be a fight not to miss." 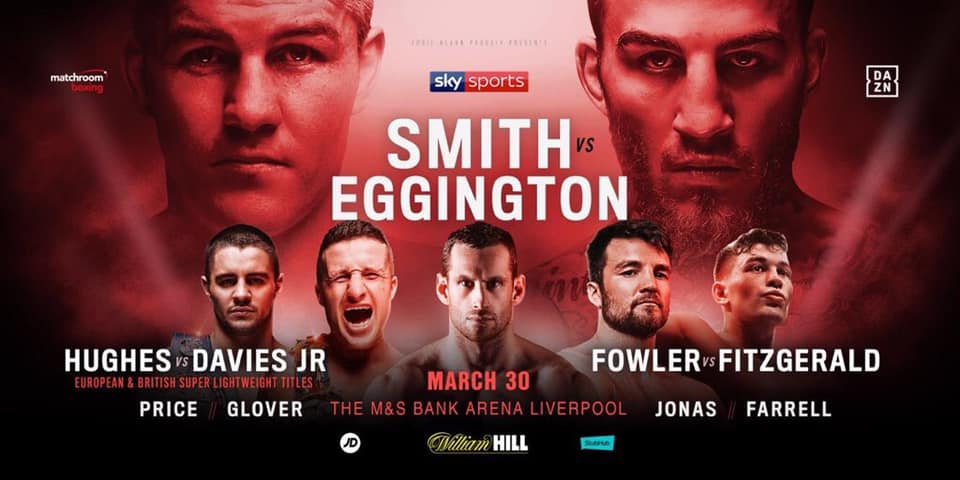 General Sale tickets for Smith vs. Eggington priced at £40, £60, £100 and £200 (Inner Ring VIP) are available to purchase via buymyfight.com

Joe Hughes - Malmesbury, England - 17-3-1, 7 KO's – fighting Robbie Davies Jnr. for the British and EBU European Super-Lightweight titles:
“I’m really excited to be going into such a big fight. In the past I’ve found myself get a little bit complacent if I’m not really up for a fight, if it’s not too much of a challenge, but I know this one is going to be a very big challenge. The motivation is to not only defend my European title but to win that prestigious Lonsdale belt.

"I was on a lot of small hall shows trying to shift tickets early on in my career and I’m from a small place, it was a bit of a struggle. I'm where I feel I deserve to be right now. A win here moves me further along to a shot at World honours."

Robbie Davies Jnr. - Liverpool, England - 17-1, 12 KO's - fighting Joe Hughes for the British and European Super-Lightweight titles:
“Everyone close to me knows what I was going through at the time of my first loss. I was in a bad place. Since that defeat I’ve rebuilt and luckily I’ve joined up with Matchroom.

"Beating Glenn Foot for the British was a real big step in my career. I could have had an easy British title defence but I want to move to that next level. My career has stagnated in the past and I’ve stayed at the same level but now it’s time to push on.

"I made sure that I had my name in contention for this fight. I’ve always wanted to be on these big shows. It’s a massive fight for me – it’s a must win.”

Anthony Fowler - Liverpool, England – 9-0, 8 KO's – fighting Scott Fitzgerald in a Super-Welterweight contest:
"I am a level above Scott, I know that for a fact. I always have been. As soon as I was an amateur I was better than Scott and under Dave (Coldwell) I have just gone to the next level again.

"I haven't showed it yet because it has been too easy. We've been saying to Eddie Hearn we want proper fights from about a year ago, but this took a long time for it to materialise. This is better for me and worse for Scott.

"I will be ready, 11st on the dot. I'll be fully prepared and whatever Scott does I've got an answer for. I am just a bigger, better, stronger fighter. Five rounds... he's going to fall."

Scott Fitzgerald - Preston, England - 11-0, 8 KO's - fighting Anthony Folwer in a Super-Welterweight contest:
"It’s a fight that I’m really looking forward to. I always knew this fight was going to happen. I’m the underdog going into this fight which is fine by me.

"Every day I wake up and I’m really motivated. I’m grafting at least two or three times a day, recovering and resting right. I was after this fight as soon as it was mentioned. I broke my hand in my last fight, this fight was meant to happen at the end of last year.

"I feel like I’ve turned 27 and finally grown up. Every day I’m doing what has to be done and that’s not just in the gym, I’m coming home and eating the right things and enjoying doing it because I don’t want to lose this fight. I want to win it and I know I can win it.”

David Price - Liverpool, England - 23-6, 19 KO's – Heavyweight contest:
“I’m looking forward to it. It’s ten years to the weekend that I turned pro and I haven’t even had 30 fights yet. I haven’t got much mileage on the clock, that’s the truth. I’ve had six stoppage defeats, two of them have been genuine knockouts. The other four, I’ve kind of beat myself.

"The older I’m getting the wiser I’m getting, more mature. I do still believe that my best years are still to come. I haven’t got many years left but I am looking after myself and living the life. Heavyweights mature later in their careers.

"There’s a lot of big names in the division who all need dance partners and there’s no reason I can’t throw my name back in the mix with a couple more wins. The opportunity is here to do it and I appreciate it greatly. I intend on delivering on March 30."

Craig Glover – Liverpool, England – 9-1, 8 KO’s – Cruiserweight contest:
“In my last fight I showed everyone a bit more of what I’m all about. Simon Vallily underestimated me. Everyone that steps in the ring with me now will know that I’m real and they won’t underestimate me. I always believed in myself. It wasn’t really a surprise beating Vallily. It was more about showing people that I’m at that level and I think moving forward I’m ready.”

Natasha Jonas - Liverpool, England - 6-1, 5 KO's – Super-Featherweight contest:
“I know I’ve got the skills. It’s fine doing it all in the gym but you’ve got to produce it on the night. I still don’t feel like I’ve produced my best but it’s coming. Some of my biggest achievements have come after my worst failings. I’m looking forward to getting back in the ring and carrying on.”

Tom Farrell - Liverpool, England - 16-1, 5 KO’s - Super-Lightweight contest:
“Hopefully I’ll get a title shot for this one. I think we’re looking at a shot at the Commonwealth or an international title. Them two up there (Joe Hughes and Robbie Davies Jnr) have got most of the titles at my weight at the minute though.

"Last year wasn’t a great year for me, it was a little bit frustrating but I’ve been patient and stayed in the gym. I’m already feeling fit and strong in the early part of camp. I can’t wait, it’s going to be a great show. I’m hoping to have an opponent named soon. I’m looking forward to the night and I’ll definitely have a belt wrapped around my waist at the end of it.”

Ged Carroll - Liverpool, England - 9-0 - Super-Lightweight contest:
“I’m just glad to be back on such a big show. Hopefully this will be the start of a big year for me. I’m hoping a big sponsor will come along and get behind me. I should get some more attention once the bigger fights come along. I’ve just got to do what I’ve got to do and carry on working hard.”

Tom Hart – Liverpool, England – making his professional debut at Light-Heavyweight:
“I’m just looking forward to it now. I had a great amateur career. I’m looking forward to getting the show on the road in the professionals. I’m lucky to be starting on such a big platform with Matchroom and Sky Sports. There’s a lot of good domestic Light-Heavyweights out there. My style is better suited to the pro game.”