Lenny Fuller is ‘The Main Man’ on perfect pro debut

Lenny ‘The Main Man’ Fuller (1-0) lived up to his moniker on his May 12 debut at Mote Hall, Maidstone scoring a knockdow en route to a shutout points win.

The former unlicensed champion from Chart Sutton dazzled in his debut on the talent-packed JE Promotions’ ‘Young Guns’ card.

Fuller, a father of two from a traveling background, was the most heavily supported boxer on the show despite the event being headlined by an English super-bantamweight champion.

The former Westry ABC student’s initiation to the paid ranks came in the form of Stockport six-footer Dale Arrowsmith (1-16-1).

The opening round was an extremely one-sided affair with Fuller showing incredible composure from the centre of the squared circle behind a stiff, sharp jab.

Steadily range-finding against the taller opponent, Lenny connected with some clean shots and began to unload some good combinations.

The second-round was where the fight came alive as the confident Maidstone man began to let his shots go, eventually catching the mobile Arrowsmith with a counter overhand right which crashed him to the canvas.

Despite the success, Fuller displayed a maturity beyond his 23-years by exacting patience and not rushing in unnecessarily.

Roared on by his huge following – the Chart Sutton resident sold over 200 tickets for his first fight – Fuller tried to cut the ring off and take advantage of his stunned opponent, who managed to box clever to hear the bell sound for the third segment.

Arrowsmith decided not to hold his feet for the remainder of the fight and came out in round-three on his toes. It was a repetitive theme of Fuller in the centre, walking down the ever evasive ‘Choir boy’ from Hyde, with success coming from several strong right hooks.

The fourth and final round started with a slower pace, the debutant still chasing and closing down, shooting out jabs and doubling up when in range.

The deserved winner, scored at 40-35 by referee Jeff Hinds, Fuller displayed the composure and confidence of a seasoned professional in his first ever appearance in the paid ranks.

Jack Jacobs from BBN caught up with ‘The Main Man’ shortly after his pro bow, “I was set a game plan and told by my trainer that I executed it to the letter, holding the centre of the ring and not rushing anything.

“The boy was strong and he knew his way around the ring, credit to him, he recovered well after I dropped him in the second and I heard him make a funny noise when I caught him in the body in the third.

I worked everything off the jab and stuck to my boxing, I felt I was switched on throughout the whole fight and overall both me and my team are happy.”

Fuller, trained by Lee Page at Combat Sports Academy, will be straight back to action on the next JE Promotions show at Mote Hall on July 7. The ‘Summer Showdown’ card features the return of former Southern Area middleweight champion Grant Dennis (10-1). 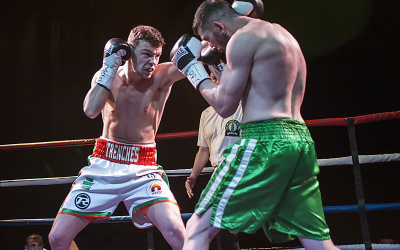