Leigh Wood defeats Xu Can in the final round

After a close first, Wood began to let his hands go during the second round. Can was mostly in a defensive posture while waiting for openings to counter back.

Can was really picking up the pace in the third, with Wood still landing the better and harder punches. The fourth was also close as Can continued to let his hands go. The right hand of Can was landing often in the fifth. In the sixth, it was Wood with the harder shots and Can with the workrate.

Manny Pacquiao backed for 10th round win over Yordenis Ugas

Manny Pacquiao on Yordenis Ugas clash: "Both of us are champions, I didn’t like that someone took my belt without challenging me in the ring"

During the seventh, both had their moments. Wood was picking up his workrate. The British boxer was doing more of the same in the eight, with Wood letting his hands go and unloading with heavy blows on Can. A close ninth. Wood may have nicked it with some heavy blows in the closing moments.

Can was landing well in the tenth. He was pressing forward and making Wood work very hard. A give and take in the eleventh. Wood was landing by far the harder shots. In the twelfth and final round, Can came out swinging. Wood was willing to exchange off the jab. Wood was still landing the more telling punches. As Can was coming on, Wood dropped him with a big right hand. Can beat the count - and Wood went on the attack and was letting his hands go. Wood was battering ahead with punches as Can was trapped against the ropes - and the referee jumped in to wave off the fight.

Campbell Hatton extended his unbeaten record to 3-0 with a straight-forward four-round points win over Jakub Laskowski, from Poland.

Hatton, the son of former double world champion Ricky, is a bundle of energy but still pretty raw and tended to get greedy at times by winging his punches in a bit wide and wild. Laskowski backed away and moved around, seeing out the four rounds with little risk of being stopped. Referee Mark Bates scored it 40-36.

Sandy Ryan (1-0) opened the show and her pro career with a shutout points win (60-54) as she outclassed Kirstie Bavington (3-2-2, 2KOs) in a six-round super-lightweight contest on her professional debut.

Anthony Fowler kept his winning run going as he geared up for a potential all-Liverpool batte with Liam Smith on October 9 as he battered Rico Mueller, from Germany, to defeat in the eighth round at Fight Camp in Brentwood, Essex. Read more... 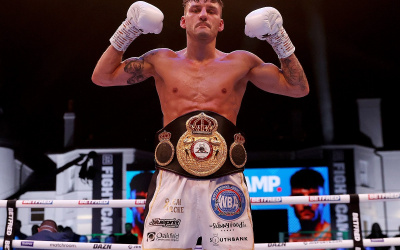