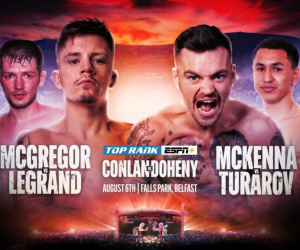 Lee McGregor will take on Vincent Legrand, and Tyrone McKenna will go up against Zhankosh Turarov, as part of the Feile an Phobail boxing event on Friday 6 August.

The card is promoted by Top Rank and takes place at Falls Park in Belfast, and is headlined by an all-Irish showdown between Michael Conlan and TJ Doheny.

McGregor won the belt in March with an incredible first round knockout win over Karim Guerfi, and now faces another tough Frenchman, when he faces former European flyweight champion Legrand.

The card also sees the rescheduled clash between McKenna (21-2-1, 6 KOs) and Turarov (24-0, 17 KOs), after they were originally due to face each over in Dubai in April.

That fight couldn’t take place after Turarov tested positive for COVID-19, but the pair are now finally ready to square off, with the winner moving a step closer towards world title contention.