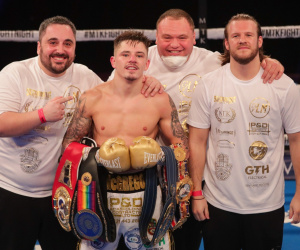 Lee McGregor produced a sensational performance as he stopped Karim Guerfi in round one to win the European bantamweight title on Friday's huge #MTKFightNight.

McGregor (10-0, 8 KOs) dropped Guerfi (29-5, 9 KOs) three times in round one, with the first two knockdowns coming from body shots, before a ferocious left hook ended the fight.

It means that in just his tenth professional fight, McGregor has become British, Commonwealth, and now European bantamweight champion.

Hughes keeps up his superb run of form during lockdown, having now beaten Jono Carroll, Viktor Kotochigov and Hyland Jnr in the space of seven months.

Free to use images from the event can be found HERE (please credit MTK Global), and here's everything you need to know from an spectacular night of action:

Lee McGregor put in a performance for the ages as he dropped Karim Guerfi three times on his way to a first round knockout win to become European bantamweight champion.

The first knockdown came 50 seconds into the fight, as McGregor dropped Guerfi with a brilliant body shot. The Frenchman got back to his feet, but less than a minute later, another body shot sent him back to the canvas.

He got up again, but the onslaught from McGregor continued, and a fantastic left hook brought the fight to the end, with Guerfi knocked down again and McGregor crowned the new European bantamweight champion in just his 10th professional fight.

McGregor said: "I said from the start of the lead up to this fight that people will see a completely different Lee McGregor. Huge credit has to go to Ben Davison, because he's made me a complete different fighter and that showed tonight.

"My physical strength, mental strength and lots else has been improved, and I'm a proper professional now. I sacrificed so much away from my family for this fight, but there was no denying me. I knew I wouldn't return home without this belt."

Maxi Hughes continued his remarkable resurgence since the start of lockdown, as he stopped Paul Hyland Jnr to win the vacant British lightweight title.

It was a great battle, with both men giving as good as they got in the opening stages, but Hughes was starting to dominate as the fight progressed, with his body shots proving to be the difference.

One of those body shots crippled Hyland Jnr in round eight, and after it originally appeared that he would go down, he remained up and referee Mark Lyson ordered the fighters to box on.

Hyland Jnr continued to walk away with his back turned, with Hughes landing a legal shot that sent the Belfast man to the canvas. He was deemed unable to fight by the count of 10, with Hughes claiming a brilliant stoppage win.

Hughes said: "Some people might call it luck, but I call it years of hard work paying off. I took my opportunity when it came and now look at this.

"For anybody out there, keep being true to your dreams. I had a goal to win the British title, and now I want to keep on achieving. I knew I could get the wins on the big stage, and this means the world to me."

Jamie Robinson and Billy Allington couldn't be separated after eight hard-fought rounds, with a brilliant fight between the two men ending in a draw.

Each boxer had portions of success during the fight, with Robinson appearing to get the better of the middle rounds, while Allington came on strong towards the back end of the fight.

It appeared at the final bell that the fight could have gone either way, and referee Howard Foster didn't he couldn't split the two men, scoring the bout even at 76-76.

Robinson said: "He had a good start in round one, but I felt I won rounds two to six, then I thought he won seven and eight. That makes it five rounds to three for me.

"We can get it on again. If we get the rematch I would be a completely different fighter. I felt like the 15 months out of the ring was a telling sign. I was falling in on my shots and my timing was off."

Allington said: "If I'm being totally honest I think boxing is about hit and not get hit. If you look back at the footage I felt everything was hitting me on my gloves. I genuinely believe I won that fight.

"Every man is entitled to their opinion, but I was comfortable in there. I love what I do though and it was good to be back in the ring. This is just part of the journey."

There was a big upset on the card, as Nathan Bendon picked up a six rounds points victory over previously undefeated Eryk Apresyan.

Apresyan started well in the fight, but it all changed when Bendon rocked Apresyan in round three, with the Polish fighting showing incredible bravery to stay in the contest.

Bendon began to take over during the closing stages, and Apresyan also had a point deducted for holding in round six by the referee. That proved to be costly, as Mark Lyson scored the bout 57-56 in Bendon's favour, earning him the upset victory.

Bendon said: "I took the fight on 4 days notice. I'm always ready to fight and fit in camp, and with a proper eight week camp I think I'll have put him away.

"I'm always sparring a lot and I train six days a week. I'm a fitness freak. I thought he was gone in the third round but I was loading up a bit. Jon Pegg was telling me I had to pace myself, and then we took the win on points."

SEAN DUFFY def. PAUL HOLT via TKO at 1:03 of round 3
Lightweight, 4 Rounds

Sean Duffy marked his first fight since October 2019 with a TKO victory, as he stopped former Midlands Area champion Paul Holt in round three.

It was a fast-paced battle, with both men giving all they got throughout the fight, but Duffy was landing the better of the punches and Holt looked to struggle as the fight went on.

The end looked to be approaching as the fight entered round three, and it didn't take long for Duffy to make his impact, landing a big body shot that dropped Holt, who couldn't make it back to his feet, securing the win for Duffy.

Duffy said: "I've had over a year out of the ring but have been training constantly with the likes of Anthony Cacace and Paul Hyland Jnr, so I was glad to be back in there. I was a bit rusty at the start as you can imagine, but I did exactly what I wanted to do.

"I got a cut from a headbutt, but that didn't put me off the gameplan. I worked on the body shots a lot and we got him out of there. I love this sport and I enjoy being in the ring. I'm grateful to be able to step in and take part in events like this during the times we're in."

SHABAZ MASOUD def. LOUIS NORMAN via TKO at 1:12 of round 4
Super-Bantamweight, 6 Rounds

Rising star Shabaz Masoud returned to the ring in style as he picked up a dominant fourth round stoppage victory over former English champion Louis Norman.

Masoud was competing in his first fight since November 2019, but it was clear that he hasn't missed a beat, as 'The Maverick' dominated the action from the first bell.

He knocked his opponent down at the end of round three, and while Norman may have been able to make it to the end of the round, two further knockdowns came at the start of round four, with the corner throwing in the towel as Masoud extended his unbeaten record to 8-0.

Masoud said: "I'm back and a lot better than I've ever been before. I've had 16 months out of the ring and I've been with Ben Davison for a full year, and I need to thank him and MTK Global for helping me improve.

"As soon as I started picking up the pace I got him out of there. Everyone thinks I've got pillow fists, but when you face me and get smacked then you'll know about it. Credit to Louis Norman for taking the fight. I don't avoid anybody, and I want a British title by the end of the year."