Birmingham’s Tommy Langford (18-0) defeated Sheffield’s Sam Sheedy (17-2) on points to lift the vacant British middleweight title in front of a packed crowd at the Motorpoint Arena in Cardiff on November 26th.

It was a split decision verdict to the ‘Baggies Bomber’ as he moved up to 18 fights unbeaten and doubled his opponent’s loss ratio.

Ultimately, Langford’s work-rate swung the score in his favour after 12-rounds of back and forth action. 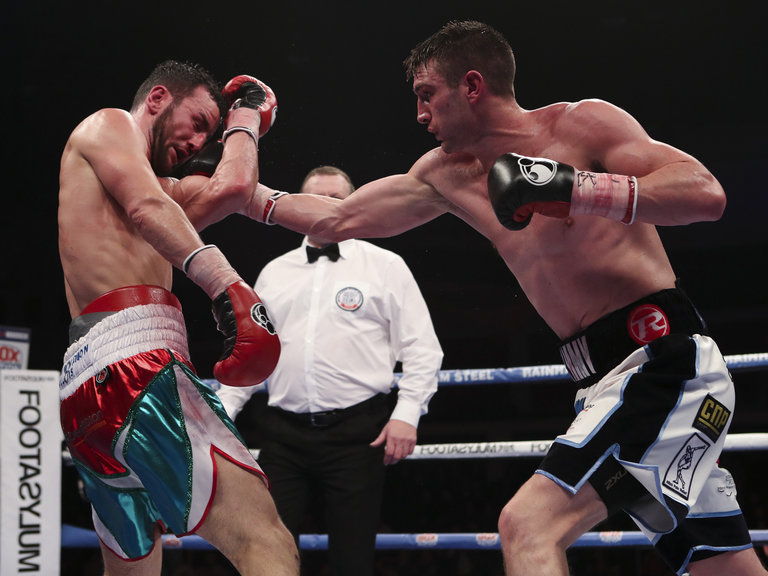 Langford, 27-years-old from Weoley Castle in the West Midlands, set about his work behind a crisp jab in the opening round.

Intelligently, Langford moved in and out of range to stay away from danger and countered well when making Sheedy miss.

Sheedy started the fight as he intended to go on – showboating for the fans, although it seemed senseless at times and worked against him.

His first attempt in the opening minute of the fight saw the 28-year-old from Sheffield casually walking around the ring ignoring Langford’s presence which ended with a right hand landing flush through his guard.

In the last 30 seconds, Sheedy stood still with arms down low in an attempt to irritate the Commonwealth titlist but he was duly ignored, so threw a right hand from too far out and was comfortably and cleverly countered yet again by Langford.

It was much the same in the second round with Sheedy throwing shots from distance and being punished for it. Langford worked methodically from behind his jab and kept out of range whenever Sheedy went on the front foot.  The Sheffield man looked sharp, however, and landed frequently.

Sheedy was warned for hitting on the back of the head a few seconds into the third round. The southpaw utilised his skills and made the round the most awkward yet, waving his right hand in his opposite number’s face, showboating, winding up the punches, and eventually found his head being pushed back on the ropes in anger by Langford who duly received a warning from referee Howard Foster.

In the last minute of the round, Sheedy caught Langford with the best shot of the fight so far and clearly smiled at his good work and even whooped in delight of landing so cleanly, but strangely declined to capatilise on his success.

Clearly enthused, Sheedy raced out of his corner for the start of the fourth and received a right hand for his eagerness.

Sheedy again tried his best to infuriate Langford with his games, at one point he started to follow the referee around the ring in comedic fashion and was subsequently booed.

The crowd were clearly in Langford’s favour – over a thousand in attendance from the South West, where he was born, and the West Midlands, where he is now based.

Sheedy showed he wasn’t intimidated by the noise and motioned Langford forward. The former England amateur didn’t take the bait and again landed to cut the showing off short, and getting the best of the many exchanges.

It wasn’t just Sheedy trying his best to goad Langford, trainer Glyn Rhodes was warned several times for his conduct in the corner during the Championship battle.

Official Foster told the former Central Area lightweight champion to stop talking directly to Langford during the round.

Langford was again busier in the fifth round and outworked his elusive counterpart, catching him clean in his own corner with a long right and left.

In the sixth, both fighters missed a lot of shots, Sheedy sneaked in a good right hook on more than one occasion, Langford replied with two good left hooks in the closing 30 seconds of the round. 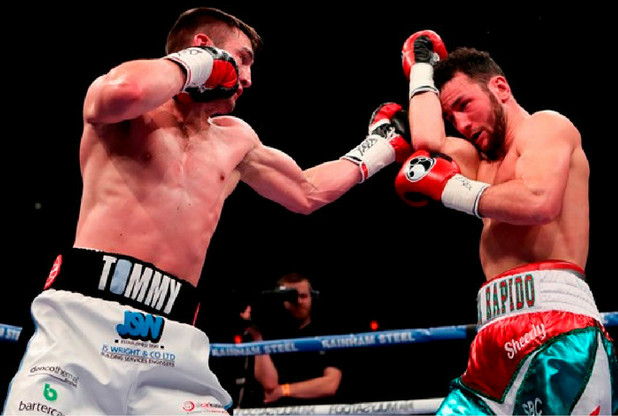 The fight was stopped moments into the seventh round so that Foster could once again warn Rhodes in the corner.

Langford started the seventh in the right fashion looking to utilise the uppercut on instruction from trainer Tom Chaney but took his foot of the gas and handed the round over to Sheedy by throwing little, getting caught plenty, and allowing the southpaw to push forward.

A big straight left shot rocked the Brummie’s head back in the final minute and he made the triumph known by excitedly roaring at Langford and pumping his chest in delight.

Langford bounced back with intent in the eighth and pressed forward throwing punches in higher numbers. Sheedy forced onto the back foot slipped on water in his corner in the first minute. He attempted to get back on the front foot but Langford boxed clever to take what was a tight round.

Down the stretch, Langford began to throw more combinations having clearly started the earlier rounds with the intention of just throwing single shots and one-two’s.

Sheedy caught Langford regularly but they were scrappy hooks landing on top and on the side of the head, and there was never quite enough coming from the southpaw to nick the rounds.

The ninth round saw Sheedy as the busier fighter, Langford seemingly a little puzzled by his opponent’s tricky work. Sheedy was elusive, eventful and clipped Langford a few times with left and right hooks. The closing 10 seconds saw the Baggie fire back with a neat combination clearly affecting Sheedy.

A third generation Mexican, nicknamed 'El Rapido', he tried to up his work-rate further for the 10th round but the Devonian was busier again. His straight shots were more effective than Sheedy’s wide hooks and slapping shots.

Sheedy did land well with a long left hand but he stopped to admire his work and once again failed to follow it up.

Foster once more went over to Sheedy’s corner for a word with Rhodes, possibly to issue a further warning for bad conduct.

Langford made Sheedy miss constantly during the penultimate round but the rare shots that did land were clean and memorable, the right hook being Sheedy’s most successful punch. Two landed flush just moments before the pair got tangled up and left Langford floored in the final minute. He slipped again seconds later, this time on the water in Sheedy’s corner, who took advantage by landing a punch whilst he was down and subsequently received a talking to from Foster for the unnecessary cheap shot.

A hard round to score with Sheedy’s eye-catching punches – at least three good right hooks to the head of Langford – but once again, the Birmingham boxer produced the higher work-rate, although a lot of his shots were landing on gloves.

The final three minutes provided excitement and tension as Sheedy gave it his all, and was undoubtedly and belatedly his busiest round of the night.

Langford seemed content to get on his bike and avoid much of what Sheedy had to throw at him, clearly convinced his name was ahead on the scorecards.

Both fighters were looking ragged after a close and competitive fight, a clumsy collision knocked Langford backwards onto the seat of his pants, ruled as a slip by the official.

A second collision proved detrimental for Langford, as the two came together in the dying seconds and a head clash caused a nasty cut above Langford’s right eye.

Sheedy finished the close, captivating, conjecturing Championship contest the strongest of the pair with Langford bleeding heavily as the final bell tolled.

However, it was the Frank Warren fighter that managed to have his hand raised, entering his name into the history books indefinitely and becoming the sixth person this decade to lift the Lonsdale belt at 160lbs – Chris Eubank Jr, Nicky Blackwell, Billy Joe Saunders, Martin Murray and Darren Barker all preceding him. 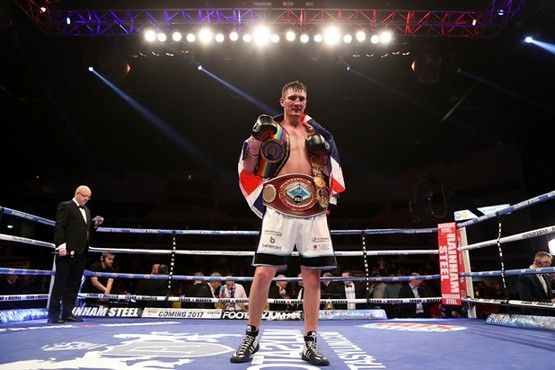 Sheedy said he was “gutted” by the defeat, but claimed he had learned from his first 12-round experience and hinted at a rematch.

Post-fight, Langford showed his elation at winning the biggest prize in British boxing but didn’t offer any promises of a rematch or plans to earn the belt outright.

He said, “I thought I won it comfortably, I was always ahead in the rounds, making him miss and landing the cleaner punches.

“It was a harder fight than I thought it would be; I think I could have been busier at times. A lot of the rounds wasn’t me losing them, it was more that I gave them away, but I’m nitpicking – I’m the British champion and I couldn’t be happier.”

He continued to say, “I’m still learning, admittedly, I know a need another couple of fights before a World title fight, I’m making a few mistakes and I need to be a bit more polished, but I can only go up from here.

“To win the Lonsdale belt outright is an unbelievable achievement and isn’t something I’d ever say no to. I’m also in this game to get to the top level and stay there for as long as possible, so if opportunities arrive like the European or World title then I’m not going to say no to those, but whatever Frank puts in front of me, I’ll do.

“If nothing comes up, I’ll defend it. There’s plenty of good domestic contenders out there.”