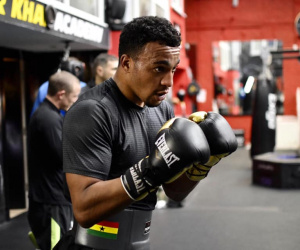 Kyle Lomotey believes he is a level above 'The Teflon John'

Kyle Lomotey (8-0) is ready for the biggest clash of his career as he looks to become an inaugural winner of the Phil Martin trophy on the December 21 Contender VIP show at Manchester's Hilton Hotel in Deansgate.

He meets 'The Teflon John' Telford (10-2-1) in the final. The 25-year-old Mancunian is a Central Area middleweight title contender, who narrowly missed out on lifting the Area honours to unbeaten Jack Kilgannon 94-96 on points in July of this year. He bounced straight back with a points win against Celtic super-welterweight champion Jay Byrne in September.

Lomotey has fought his way to the Contender VIP's initial series finale, where a massive cash prize and the Phil Martin trophy will be at stake for the winner. Lomotey defeated tough Scot Craig Kelly in the semi final's as he forced the Glaswegian to retire on his stool. Lomotey faces fellow North West native John Telford in the series one finale.

Lomotey opened up about his route to the final and his career in the professional ranks so far, "I have had a good start to my professional career under the guidance of Alex Matvienko. He has really brought me along nicely and I've been able to box on some top-class shows already such as the Amir Khan show in Saudi Arabia and now back to back Contender VIP shows, so I'm very grateful for how my management team has moved me in the pro ranks.

"I've had some good learning fights and good experiences as a pro so far and that has aligned me for this big opportunity to win the Phil Martin trophy on December 21. It's going to be a really explosive night of action from top to bottom of the card and these are the type of shows you want to be in involved with as a pro."

The Leigh middleweight said, "It's going to be a quality night of boxing all around and an explosive final but I am fully confident that I am going to win this fight and win in style. John is a tough kid but I believe I'm a level above him and I'll show that on the night.

"To win the Phil Martin trophy is a fantastic thing as Phil is still regarded as an iconic figure in Manchester and British Boxing, so to win a trophy as a part of an event inspired by his visions for boxing, it will be very special to emerge victorious and I have worked very hard in camp with my team to make sure that I put on a career best performance on December 21at the Hilton Hotel."

The Art of Boxing: Basic Skills to Know