Doncaster's Kyle Fox (5-0) is set to make history as he becomes the first boxer to fight for a title in the Nottinghamshire town of Worksop on June 30.

Trained by Michael White at the Fighting Fit Gym in Dinnington, Fox said of his preparation for his first title contest, “We’ve been putting in a lot more rounds in sparring, I’ve been doing 10-12 rounds and pacing myself and picking my work a lot more.

“I’ve been travelling up to Scott Calow’s gym in Nottingham quite a lot to do a lot of rounds with his boys. I’ve always said I’m not a four-round fighter, I suit the longer rounds, the guys I spar say I get fitter as I go on.”

Fox’s opponent, Innocent Anwanyu (25-34-3), is a former Dutch national champion that has experienced over 390 professional rounds in his 62-fight career. Despite not winning a fight since February 2017, he hasn’t been stopped in his last 10 contests against some top prospects and a Southern Area champion.

The last person to halt Anwanyu was former English super-lightweight champion Anto Upton in September last year in the final round of their six-round contest.

“I’ve seen quite a few clips on YouTube and he seems to be a real tough, inside fighter, short and stocky,” commented Fox. “He’s obviously got knockout power, he’s got something like 15 KOs from 25 wins, but his style and my style will be perfect for me to be victorious.

“I’ve told my management team from start that I only want tough fights, I don’t like easy fights because the better the opponent, the better I perform.

“There’s no pressure on me, just excitement. It’s exciting to know I’ll be headlining the show for first title in Worksop. Just that bit of history is exciting in itself.”

The former Yorkshire amateur champion raced to five fights unbeaten in his debut year in the paid ranks and now looks to step up to become a serious title contender.

“I don’t ever like to look past a fight, but I’d be lying if I didn’t say I haven’t got a plan in mind. I would like to fight for the Central Area title at home in the Donny Dome. The welterweight title is vacant at the moment, so it’d be great if my promoter could make something happen by the end of the year for me.” 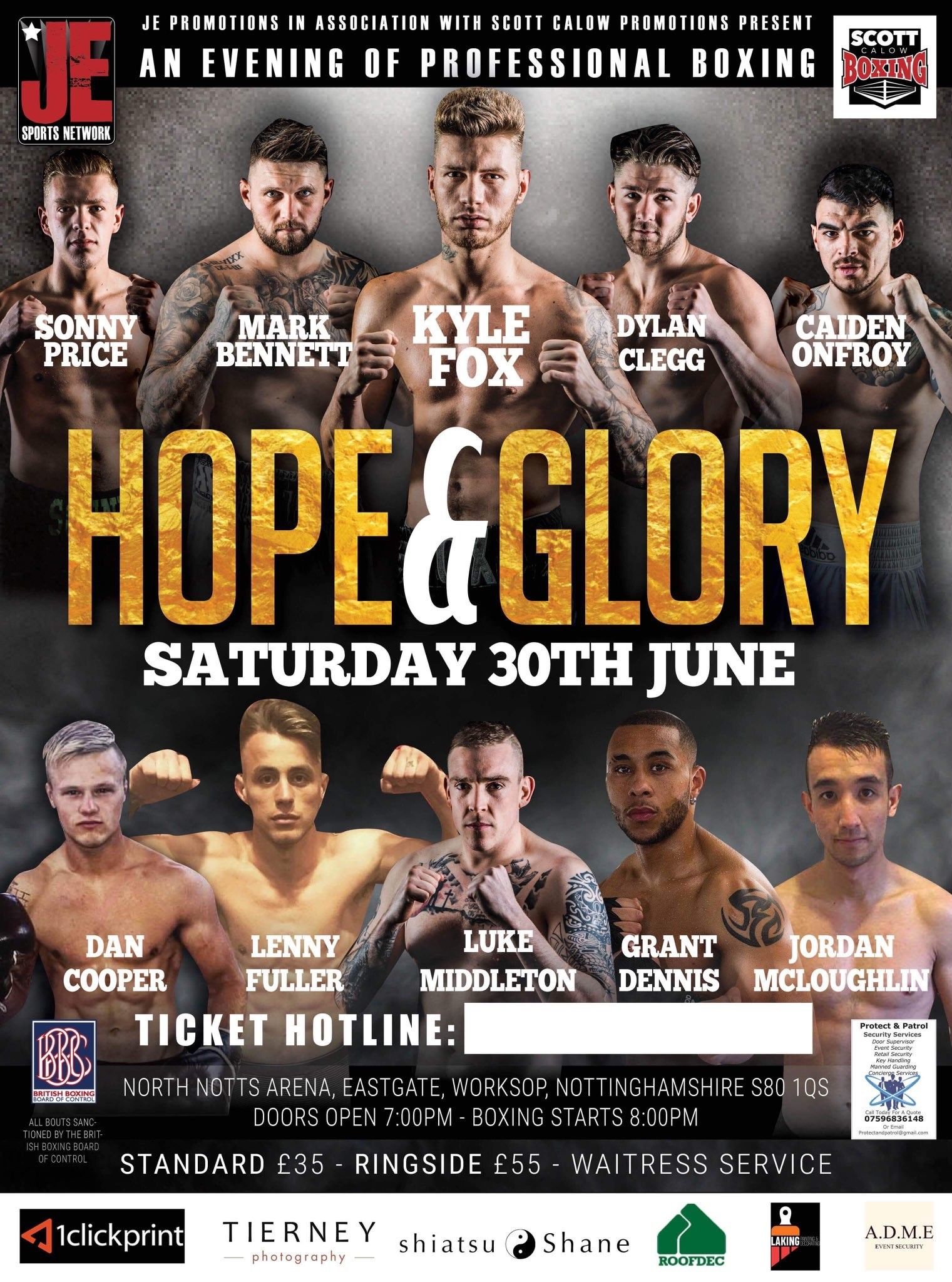 Worksop will also get to see their newest pro boxer Dylan Clegg as he makes his eagerly-awaited debut in his hometown at super-middleweight against Chessington’s Richard Harrison (2-29).

Managed by Scott Calow and trained by Michael White at the Fighting Fit Gym, the former amateur had 25 fights and brings a large fanbase with him to the paid ranks.

Scunthorpe’s ‘Kid Nytro’ Dec Spelman (11-1), 26, returns to the ring for the first time since his ill-fated fight with Scott Westgarth in February, who collapsed in the dressing room and later died in hospital.

Heavyweight Mark Bennett (1-0) made his successful transition from the untested unlicensed scene into the pro ranks last November against Hungarian Ferenc Zsalek (21-62-6) on points, but picked up an unfortunate injury that has kept him on the side-lines since.

The 30-year-old Doncaster puncher, trained by Michael White at the Fighting Fit Gym in Dinnington, only had his first boxing fight aged 27 and has plans to be fast-tracked to the top-10 in Britain as soon as possible.

Sonny Price (3-0) has his fourth bout in eight months since making his pro bow last November against iranian Yadollah Ghasemi (1-11-1).

The 21-year-old super-lightweight from Swallownest spent 10 years in the amateurs, racking up over 50 fights and now has ambitions to become a British champion.

Sheffield’s Caiden Onfroy, 29, finally makes his transition to the paid code after turning his back on a troublesome past to become an excellent amateur boxer, reaching the ABA Novice’s finals twice when representing the Steel City Gym.

Promoter Joe Elfidh praised his next event, “Got some cracking debutants appearing on the night and the fact we’re showcasing the first title fight on the bill shows how far these shows have come over the short space of time. Kyle Fox will relish headlining the show and lifting that British Challenge belt above his head!”