Kieron Conway produced an incredible performance as his British super-welterweight title challenge against champion Ted Cheeseman finished in a draw.

Conway (12-1-1, 3 KOs) and Cheeseman (15-1-1, 9 KOs) had a fantastic back and forth battle at York Hall in London, and it showed just how close the contest with after the three judges failed to split them.

The judges scored the bout 116-113 Conway, 115-114 Cheeseman and 114-114, with both men having their hands raised after a fantastic battle live on the Sky Sports and DAZN cameras.

Liam Smith says he will be a step too far for Anthony Fowler, who admits: "I’m under no illusions I’m up against it"

Conway said: “It is what it is. It was a good fight and a hard fight. Hopefully I’ve announced myself well on the scene. I hope everyone liked what they saw tonight.”

Cheeseman added: “Kieron Conway put up a good fight and was very tough. He had a great work rate, and good luck to him in his career. I trained like a warrior for 14 weeks and fought my heart out.”

Promoter Eddie Hearn said: “I thought Kieron was sensational tonight. It was close and I thought he was excellent. He’s never boxed over 12 rounds before this and he definitely will come again.” 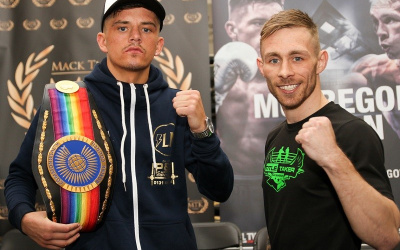 Weights and running order for Lee McGregor vs Scott Allan

Steven Ward and Liam Conroy war ends in eighth round