Linardatou, known as 'Medusa', brought pressure throughout the contest but Ireland's Taylor grew into the contest and gradually took over as the fight progressed.

She was close to tears after the decision at the Manchester Arena, with the crowd serving up a rapturous ovation for a fighter who now owns all four world belts at 135lbs and now this one in a division higher.

"I thought I boxed beautifully on the outside and I didn't get sucked into a fight," added Taylor.

This was Taylor's first outing since she controversially beat Delfine Persoon on points in June, the only other fighter to inflict a loss on Linardatou, and there were question marks around whether she could maintain her signature speed at a higher weight.

Linardatou was a bundle of movement early on - swaying her upper body left and right, she forced Taylor backwards but walked on to right hands deep into round one.

The champion - fighting under a Greek flag - was unquestionably game, so much so that when she slipped in round three she bounced up immediately to attack, only for the referee to call for a momentary pause.

Taylor though, cut above the right eye after three rounds, seemingly broke her opponent's heart in the middle rounds as she began to read what was coming at her and counter repeatedly.

Linardatou's corner screamed instruction but the movement and boxing IQ before her was winning the day. There were sporadic, often wild, shots that landed on Taylor but she remained poised, picked her punches well - and when things got aggressive in a grapple, dished out rough work of her own.

Her next move will ideally be a unification bout at 140lbs with American Jessica McCaskill, or even more mouth-watering would be a bout with Norway's great Cecilia Braekhus, who holds all four belts at 147lbs.

The Mancunian hero entered to a raucous ring walk on his much-publicised farewell fight, but had to grind out a win as he emotionally ended his 13-year professional career at the Manchester Arena.

A volume of punches from his Spanish rival caught the eye midway through the lightweight bout but neither threatened victory inside the 10 rounds.

"Getting the win was the main thing but now I know my time's up," he told BBC Radio 5 Live.

"I wasn't nervous coming into the arena but it did get to me a bit when I came out here - knowing it was for the last time.

"Hopefully I've left a bit of a legacy. And I'll be back in the gym training the youngsters and hopefully some of the champions of the future."

Around 9,000 had turned out to bid a fighting farewell to one of the city's sons and after a thrilling Crolla ring walk, songs of his beloved Manchester United rang out through round one.

Urquiaga fizzed a solid right hand around the guard late in the opening three minutes and another in round two, pointing to a desire to ruin the evening and thrust his own career to new levels.

The Barcelona-based fighter threw punches in bunches but only had one stoppage win among his 13 triumphs coming into the bout, leading some to think Crolla could afford to let his hands go in the face of limited power coming at him.

By the fifth though, Urquiaga had landed more than enough work to merit respect, with Crolla walking on to an uppercut and appearing briefly frozen.

As tunes from Manchester bands blasted out between rounds, an air of concern was apparent in the arena.

Crolla, his guard high, marched forward but was thrust into the ropes by a heavy shot in the sixth before landing a smart left hook of his own late on.

He tried to work the body of the away fighter - a tactic that has proved fruitful throughout his career - but never found a way to rock the underdog, who had visibly reddened under his right eye by the 10th and final round.

In the last round of his career Crolla fired off sharp left hands in a bid to fashion an opening but, in truth, a stoppage never looked likely.

He lapped the ring, arm raised, to acclaim moments before a verdict which sees him end a rollercoaster career with 35 wins, seven defeats and three draws.

Crolla had already served hard years in the ring by the time he was badly injured when apprehending burglars at a neighbour's home in 2014.

The incident forced him to amend his training as a result of the broken ankle he suffered. His bravery briefly cost him a world-title shot but with an enhanced profile by virtue of his neighbourly act, he claimed his first global honours by stopping Darleys Perez at this very arena 11 months later.

Crolla squeezed the most out of his talent. As it has other fighters, a naturally humble, salt of the earth character served to enhance his likability.

Those who paid to follow him know only too well of the ups and downs. Thankfully, in this most punishing of businesses, his career ends on his terms and with health in tact.

Commonwealth middleweight champion Felix Cash (12-0) and English champ Jack Cullen (17-2) produced the exciting fight that everyone had been hoping for, with former Team GB boxer Cash getting the win and retaining his Commonwealth strap in the eight round.

Jubilation for Denaby's Terri Harper (9-0) as she celebrated 23rd birthday with a successful maiden defence of her IBO World super-featherweight title on her Matchroom debut. She outpointed Viviane Obenauf (14-6) 99-91, 99-92 and 97-93. 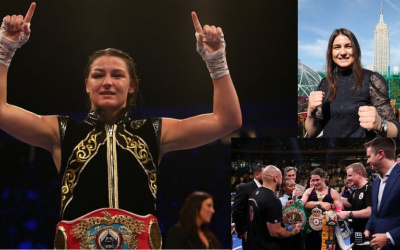