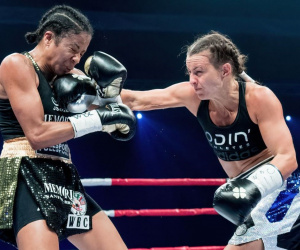 Norwegian Thanderz, who boasts an unbeaten professional record, became mandatory in November 2019 after claiming the interim WBC World Super Featherweight title with a points decision over Danila Ramos of Brazil.

Current champion Terri Harper caught the eye last time out, a pulsating 10-round split draw with Natasha Jonas saw the Doncaster fighter retain the titles that will now be on the line in the clash with Thanderz.

While respecting the potential in Harper, Thanderz believes she has the tools to perform on the night.

“It’s an amazing feeling to know that I’m finally fighting for the world title I've been waiting such a long time for this moment, and I just know I’ll give my everything to win the title.

“Harper is a young and talented fighter. I think she’s a very hard working girl. She’s fast, she has a good technique, she has stamina, and she’s a very good fighter. It will be a pleasure to share the ring with her.

“I am confident I can beat her. I have a very good feeling, and I’m working very hard in my camp to be the best version of myself. I know it will be very difficult , especially because of the circumstances of the fight, but I’m prepared to surprise and shock everyone when I get the win.”

Fighting for the first time on British soil, Thanderz is positive and upbeat on her chances.

“I feel very good about fighting in the UK. I’ve never fought in England, so I can’t wait to have the experience of fighting in a complete new country with so many boxing fans.”

At 13-0 and 10-0-1 respectively, an unbeaten showdown between Thanderz and Harper is a mouthwatering prospect with the winner walking away with unified world champion status.

“This is the most excited I’ve been for a fight, I feel like I’ve got a lot to prove,” said Harper. “We’ve had the opportunity in this camp to work on lots of new things, having a strength and conditioning coach join the team. I want to go out and put the wrongs right.”

Promoter Nisse Sauerland backed his fighter to come away with the win, and believes it is the perfect time to introduce Thanderz to the British scene.

“Katharina brings that Viking power and warrior spirit, and it’s a good time for her to come up against elite opposition. She’s undefeated, the interim belt holder and following the trail set by Cecilia Brækhus in bringing a world title back to Norway.

“She’s said herself she’s going for greatness and you can see it in the way she operates, we can’t wait!”

The fight will feature as part of a major evening for women's boxing, with three World Title fights taking place, including Katie Taylor's return to the ring.

Eddie Hearn added: “This is an historic moment. A huge night of boxing that will be headlined by not one but three women’s World Title fights. Katie Taylor has spun the game on its head since she turned pro and has paved the way for so many great female fighters.”