There is a 12th pro-outing for rising Mexican-American starlet Diego Pacheco (11-0 8 KOs), Gabriel Valenzuela (23-2-1 13 KOs) looks to build on his impressive win in London, England over Robbie Davies Jr in February against Juan Ocura (14-14-1 6 KOs), Christian Alan Gomez Duran (20-2-1 18 KOs) features on the card having recorded stoppage wins on two Canelo cards in December and May against unbeaten Jorge Sanchez (13-0 5 KOs).

Below are a selection of quotes from the final press conference:

Joel Cordova on his friendship with Martinez: “Well, Martinez, besides being a great champion, he’s also a great friend. For me, this fight is very important. I train and focus differently for each of my rivals. Martinez is not an exception. He’s a true champion and he’s going to face another one. “We come prepared to fight. For both styles: strategy and clashing.”

Julio Martinez on his friendship with Cordova: “As I’ve always have said, with everything but fear and with whomever, wherever. This is boxing. He’s a great friend, truthfully. Let the best fighter win and that we both leave the ring in good health. I’m here to box and truly see if I am of the best there is. I want to face the undefeated. I want to unify the belts, God willing. I’m grateful to Eddy Reynoso and Eddie Hearn and I will not disappoint them.”

"I cannot wait to be in the Arena on Saturday night. And everybody, turn out on Saturday night, come down and begin this adventure with us with Matchroom, with Clase y Talento, with Eddy Reynoso, with Saul Alvarez and Canelo Promotions.

"This is a massive opportunity for boxing in Mexico, and we promise you, we will be providing great opportunities for talented young fighters and world Champions to fight at home. This series is going to be a lot of fun live on DAZN."

Eddy Reynoso: “It’s very important for Martinez to reappear. It’s been a while since he last fought. Things came up. Now, he’s very prepared. It’s going to be very good fight. Joel is an extraordinary fighter as well. A world title fight between two Mexicans rarely happens. We are fortunate that it’s happening here in Guadalajara. It’s going to be a great fight. I think Martinez’ return versus Cordova, a fellow Mexican, will be a war.”

Gabriel Valenzuela on his 10-round contest with Juan Ocura: “First of all, we're really thankful for the opportunity of being here in this big fight. We feel very excited and happy. My team and I are motivated. This project is bringing more opportunities to bring about new talent from Jalisco and Mexico. The truth is Mexico is world power in boxing and I’m certain thousands of champions can come from here.

“First we have to focus on this fight in the Saturday. We have talked with Eddy and there are plans to look for a world title fight at the of 2021. Hopefully, things come together. We want to be champions of the world right now.”

Diego Pacheco on his eight-round contest with Jesus Moroyoqui Palomares: “First and foremost, I want to thank everyone for being here. I want to thank Eddie Hearn and Eddy Reynoso for putting together this event here in Guadalajara for all of us and a lot of other young Mexican fighters.

“I feel like this opportunity that they're giving to these Mexican fighters is one that should have been done a long time ago because there's so much talent here in Mexico that doesn't get the opportunity or the platform to show the world what they have.

“I'm really happy and excited for these Mexican fighters and me as well for the opportunity. I want to take my team, my family and everyone has helped me get to this point. I'm ready to go Saturday and don't miss it on DAZN.”

Christian Duran on his eight-round contest with Jorge Perez Sanchez: “For this upcoming fight I feel great, I feel strong. We are facing a strong rival, but I’m good. I feel very strong. So, I’m going to give it my all and God willing I will win on Saturday.”

“I think these fight series are important. Not just these, but each one of the fights in a boxer’s career because from each of them impacts their prospects.”

“I feel relaxed, good, and strong. God willing, Saturday I’ll be the one who’s hand is raised in the air. So, I’m here. Ready for whatever Eddy provides us. We are ready to work.”

Eddy Reynoso on Valenzuela and Duran: “Gabriel and Christian are both great prospects. Gabriel comes with a huge triumph in England. Valenzuela also comes with two great performances in Saul’s functions. Pacheco fought in the Callum Smith undercard. He’s a tremendous prospect. He’s of the best in the U.S. Overall, it’s a very important undercard. They are young boxers that will no doubt continue to grow.”

Daniel Matellon: “This is a great opportunity with DAZN, and I won’t let it go to waste. I’m already a champion and I’ll be defending it for the first time to keep it.

“I'm a calm guy. I’m used to pressure as I’ve traveled to various countries. To fight here in Mexico brings me joy. I think we’ll make a great combat and will not give judges a chance to have a contradicting discussion about that.”

Jose Argumedo: “Of course, this is going to be a great fight. It’s a joy to fight against a great champion. We are reading to put on a great fight on Saturday.”

Eddie Hearn: “The WBA interim Championship of the world. This is a great fight. Matallon against Argumedo Do not miss this fight live on DAZN from Guadalajara on Saturday.

Eddy Reynoso: “Before anything else, Daniel Matellon is a great fighter. A World Champion. Argumedo has also been a champion. We went to Japan to beat Takamaya. Now, he’s jumping weight classes. It’s going to be a great fight and both boxers will adapt to the different boxing styles.” 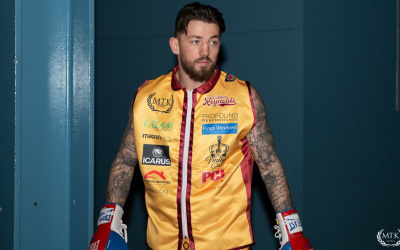