Trained by Mark Gillespie, he then became British champion with a third-round knockout of Cumbria’s Liam Conroy (18-5-1, 9KOs), which was followed by a further two defences of the WBA ranking title – a fourth-round knockout, then a seventh-round knockout... there’s a recurring theme here.

His 13th opponent is a fellow unbeaten light-heavyweight who has a brace of wins in the amateurs over ‘The Savage’ Alen Babic (4-0, 4KOs), who is currently bulldozing his way through the heavyweight division. Standing at 6ft 3”, he regularly weighed in at 200lbs. His last fight in the World Series Boxing, he weighed in at 178lbs. Buatsi also appeared in the WSB on the British Lionhearts team, but they never met in the ring due to operating in different weight classes.

The 33-year-old Central European is used to being visitor – this will be his 12th pro fight in an eighth different country. He was an experienced, elite amateur and now currently unbeaten as a pro , so he deserves respect from anyone he faces.

In 2019, Calic fought three times in eight-round contests against opponents with a combined record of 37-31-3. Buatsi also fought in three fights, which were all championship contests scheduled for 10 or 12 rounds, and his trio of rivals had a far more respectable record of 57-11-2.

Nine of Buatsi’s 12 opponents have had winning records, Calic has only faced seven so far and has never been involved in a championship bout, whereas this is Josh’s seventh.

Despite his depth of experience, Calic is taking a huge leap in levels by stepping into the ring with Buatsi. In his second to last fight, he KO’d Balazs Horvath (31-30, 8KOs) in the first round, which sounds impressive, but the Hungarian has been knocked out 28 times from 30 defeats. He goes down the moment he is touched whether it lands heavily or not. For Calic to even share the ring with such an appalling opponent in his 10th contest is not only disappointing, it’s completely bizarre.

Calic is skilful and capable after spending a lifetime in boxing, but Buatsi is a level above him. His varied shot selections will land all fight long, with ramrod jabs, body shots, uppercuts, left and right hooks. The Brit is 175lbs of pure muscle and those shots are whipped in with spite and power, and no one can withstand that for very long. Only one man has made it as far as seven rounds with Josh and that was Canadian Ryan Ford (17-6, 12KOs), who has shared the ring with world title contender Avni Yildirim (21-2, 12KOs) who is set to be Canelo’s next opponent. Joshua is the only man that has managed to stop Ford.

I fully expect JB to cut him down within the first four rounds.

Aged 38, the ‘Pitbull’ won a bronze medal at the London 2012 Olympics and became the only athlete from a Latin America country to win a medal in women’s boxing, as well as being the first boxer from Brazil in 44 years to win an Olympic medal. She was also a Rio 2016 Olympian too.

In her 2017 pro debut, she decked her opponent Elaine Maria DeAlbuquerque (1-3) twice in round six to win 60-52 on points. They rematched in Santos’s third fight and she knocked her out in round one. It remains her only stoppage win as she quickly stepped up in levels to fight for the WBC Latino Female super-lightweight title, which she won in her fourth fight via points – 100-89.

Then she won the WBC Silver Female super-lightweight title against former two-weight world champion, Claudio Andrea Lopez (26-11, 6KOs), who held the WBA feather and IBF super-feather twice. She defended it once in February this year to move up to third spot in the World Boxing Council’s rankings.

Cameron has the upper hand in power in this contest, but Dos Santos could probably claim the greater amateur pedigree being a two-time Olympian and two-time national champion, but Cameron was also a good amateur as a two-time English champion, World Championships quarter-finalist, and winning bronze and silver in the 2010 and 2011 EU Championships.

Despite the extensive amateur career, the Brazilian doesn’t possess many of the qualities that come with being an amateur, instead looking like she’s been a pro for years. She isn’t light on her feet, they’re completely planted and she likes to box at mid to close range. She still moves her upper body well but can be hit, but she is very stocky and tough and nothing seems to faze her. Her shot accuracy is very good and she’s quick to counter.

Cameron will not have to go looking for Dos Santos, she’ll be there in the middle of the ring ready to go. It’s hard to tell if Cameron could win by knockout because Dos Santos’s chin has never been tested. Her frame suggests that she’ll be hard to bully or budge backwards.

At mid-range, I think Cameron could outwork and outland the South American. She’ll could be open to those accurate and intelligent counters coming back, but she has been 10 rounds with an opponent with a 100% KO record.

I predict Cameron to win a hard fought, close fight on points.

Fresh from his emphatic two-round destruction of Shawndell Winters on the final weekend of Fight Camp, ‘The Savage’ Alen Babic (4-0, 4 KOs) returns to the UK looking to impress again as he locks horns with Irishman Niall Kennedy (13-1-1, 8 KOs) in an eight round Heavyweight contest. 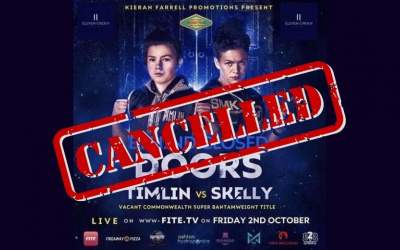