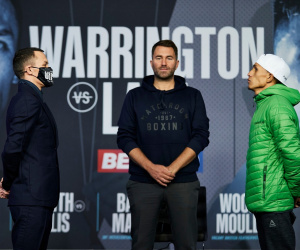 ‘The Leeds Warrior’ Josh Warrington (30-0, 7KOs) will end a 16-month hiatus when he steps through the ropes at The SSE Arena this Saturday, February 13, to face hard-hitting Mexican Mauricio Lara (21-2, 14KOs).

It’s the first UK boxing event of the year, so fight fans are highly-strung in anticipation for the first bell to ring.

It’s Warrington’s (second phase) Matchroom debut, so he will be looking to mark the occasion with an impressive display. He will also want to send a message to his future rivals, whether that’s Xu Can or Gary Russell Jr, that he is coming for them.

The 30-year-old has done everything right in his career and not many expected him to ever reach this point. He has been written off in a lot of his fights that he has come through as the underdog to win. He is 4-0 in world championship bouts, which includes scalps over Lee Selby and Carl Frampton.

He has worked his way up through the ranks in the best way possible by winning English; British; Commonwealth; European; then World featherweight titles – his collection is perfect and very well deserved.

However, he was forced to vacate his biggest prize – the IBF World title – in January after his proposed unification fight with Xu Can, planned for April, wasn’t sanctioned by the International Boxing Federation.

It’s a shame for Warrington, but those big fights are still promised next, and British fight fans were pleased to see Sheffield’s Kid Galahad and Liverpool’s Jazza Dickens ordered to contest it instead, meaning the belt stays on these shores.

In the final press conference, Warrington acknowledged his 31st opponent’s power, and rightly so with 15 KOs from 22 victories.

‘Bronco’ also knows he has power and can be guilty of being overeager and overloading on his shots, trying to put maximum force into his attacks. When he does this, he can be caught easily as he’s found wide open. He appears to have a decent chin, but has been stopped before.

He can also be at fault for waiting to long and gets caught for not being busy enough. His strength is evident to see and his opponents often have a torrid time when sharing the ring with him. He has stopped eight of his last 10 opponents.

The 22-year-old Mexican has never been in a title fight and only went 10-rounds once in his last contest in December. As a professional, he has only experienced 101 rounds, which is 130 less than his next opponent. He has also never fought outside of his continent before.

Warrington’s superior workrate, boxing skill and infighting should be very effective against the Mexican, should he be able to get up close.

Josh gives an incredible account of himself in every single fight, his engine and volume of punches is admirable. Since he was an amateur, he decided that the best way to win fights was by throwing more punches than his opponent – simple but effective. He outworks everyone he comes up against, which often includes fighters with superior skillsets then him. Put him in with the best featherweights in the world and he gives back a ‘Fight of the Year’ contender.

His power has been questioned before; Frampton joked that he had pillows for fists, but in their 2018 fight, the Irishman was rocked several times, notably in the first and second rounds, where he just about held on. Josh took his fair share in return from Frampton, proving he has a granite chin.

His first 15 fights, consisting mostly of four and six-rounders against journeymen, all ended in points, so his knockout wins have all come in the second half of his career as the level of competition has risen. So, since scoring his first stoppage in 2013, his KO ratio is actually double at 46%.

He is not the slickest of fighters, can sometimes come forward a bit predictability, but when he closes the gap and gets where he wants to be, he lets his punches go with great efficiency and quantity. And, again, despite his KO ratio not being high or very fearsome, he does have a killer instinct and will finish a fight when the opportunity is presented to him.

In his last fight, he blew Sofiane Takoucht away in the second round, first decking him with a single right hand on the button. He was patient and deadly with his second knockdown, then ended the fight with another right hand on the chin that spun the Frenchman around until Bob Williams stepped in to save him.

As the first ever world champion from Leeds, Warrington has an incredible army of support whenever he fights, but this will be his first performance without them spurring him on. I believe that the behind the scenes crew are all planning on wearing Leeds shirts to make him feel at home!

I believe that Warrington will score another knockout. He knows he has power and gets a bit miffed when people don’t believe him or credit it him enough for it. He lands powerful punches on his foes and hurts them, whether he puts them away or not, but his KO ratio is still a lowly 23%.

I think that he will be incentivised to send a message to his next potential opponents by scoring another consecutive KO, and I think he could pull it off early doors again. If I have to think sensibly, then I predict a KO win to Warrington by round seven at the latest.

Let's not forget that Lara has a puncher's chance, is coming over here to cause the upset, and will be dangerous throughout. However, I have trust in ‘The Leeds Warrior’s’ chin to hold up against any clean blows landed from the young Mexican.

'Brown Flash' Zelfa Barret (24-1, 15KOs) defends his IBF Inter-Continental super-featherweight title and gets an opportunity to test himself against a former world champion in Kiko Martinez (41-9-2, 29KOs), who obviously isn't the same fighter he was five years ago, but is still a force to be reckoned with.

In the Spaniard's last five contests he has lost just once, become a European featherweight champion, challenged for the WBC World title, and comes into this contest with back to back wins behind him.

The 27-year-old from Manchester knows what to expect when the bell sounds and claims to be fully prepared for the war that 'La Sensacion' will bring.

Zelfa is a very clever, mature, adaptable, all-round, skillful fighter and should stick to his discipline and game plan to win this 12-round contest, which I believe is his fight to lose.

With three of his last four victories coming inside the distance, there's a chance he could get the job done early and add his name to this list of world champions who have stopped him before - Gary Russell Jr; Leo Santa Cruz; Carl Frampton; Scott Quigg.

Obviously his last win saw a 'KO of the Year' contender against Eric Donovan. I think the reason he stood there in front of him for so long, not really moving his head, taking a few shots, was because he knew the finish was coming. And what a finish it was! I really hope to see the same again in this fight.

He has to be at his very best, which I believe he will be. He seems well prepared and is a very professional, diligent fighter, who is hungry to step up and impress. If Kiko comes forward as we are accustomed to seeing then Zelfa could land his clever counters and hopefully reel off another devastating left hook.

32-year-old ‘Leigh-thal’ is the favourite to win. His last fight was a thrilling 10-round battle with Jazza Dickens in the Golden Contract semi-final, losing via mixed decision to the in-form featherweight that went to win the whole tournament and next fights for the IBF World title.

Taking away the world level fighters in the 126lbs division, such as Warrington, Galahad and Dickens, next in line at the top of the domestic tree is Wood. Of course, there’s Ryan Walsh, whose vacated title they are fighting for, and Isaac Lowe, who seems to be overseas mostly now, but he could still come back for this belt that he thought he should have won in 2018 when he drew with Walsh.

Wood is a stylish fighter and uses clever feints and tricks whilst sometimes standing with his hands by his hips. He moves in and out of range effortlessly and loves to whip in body shots. The way he handled Olympian Davey Oliver Joyce in the Golden Contract quarter-final was such a joy to watch. He sizzled that night with two knockdowns en route to a ninth-round stoppage.

26-year-old Reece Mould from Doncaster is the reigning featherweight champion and makes the natural step up to British level here.

His inexperience against Wood is clear to see, with almost half as many fights as his 17th opponent, who has completed double the amount of rounds in the paid ranks.

His win over Sean Davies to win the English title was very impressive. The blisteringly swift left hook to end the fight seconds into the fourth round was sublime. He had Davies over in the first, third and fourth rounds. The towel came in on that third knockdown but there was no way the British title contender from Birmingham was getting up. Davies has since become a journeyman, losing his last 12 bouts.

He is eager and confident, but is still young and learning, and not quite on the same level as Wood is yet. He has the ability and aptitude to get there someday though.

I think Wood’s vaster experience, especially in these bigger championship fights, will be the deciding factor. I’d expect him to look very comfortable and relaxed in there with Mould. With his composed style and maturity, I think he could land some very accurate, stinging punches on the younger lion. His desire to win a belt that eluded him in the past will also drive him on to victory.

I haven’t really seen much of Mould or whether his chin has been tested yet, so it’s hard to foresee how the fight could go. If I’m going by my greater knowledge of Wood, then I think he will visibly be the better boxer right from the start, and maybe even make it look easy. I'd imagine that Mould will go forward while Wood opts to box on the backfoot. If I’m pressed to give an accurate prediction, then I think Wood wins inside the distance, probably before the contest reaches the championship rounds.

He was 11-0 when Gavin McDonnell stopped him in six to win the British super-bantamweight belt, so if Mould doesn’t win this time, he will be encouraged by Leigh Wood’s history to keep going. 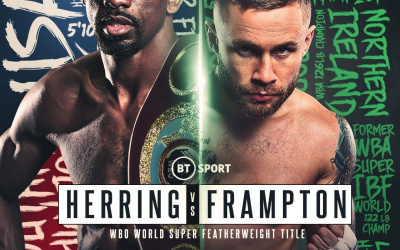