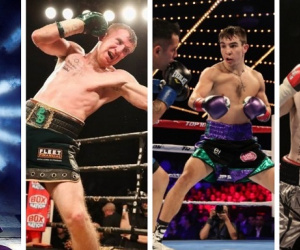 With Belfast boxing in the midst of an all-time high, Barnes is looking forward to plenty of supporters making the journey across the water.

Barnes said: “It’s crazy to have so many Belfast boxers on the card. I saw Warrington tweet that the fight should have been in Belfast because there are so many of us on it. We’ll certainly be bringing plenty of support.

“I was best man at Carl’s wedding and we’re very good friends. In terms of him as a leading light for Irish boxing, we’re so lucky to have the likes of Carl. He sells out massive arenas, brings TV coverage and brings it all back to Belfast.

“If you’re a boxer from Belfast, Carl Frampton is someone you’d aspire to be. If you can do a fraction of what he’s done in his career with winning all those world titles, you’ll have done well.

“Frampton and Conlan are the godfathers to my kids so to be fighting alongside them on the card is special on a personal level for me.”

Josh Warrington - We didn't have to take the Carl Frampton fight