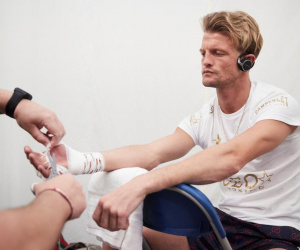 Jonny Phillips equipped with game-plan for Ibrahim Nadim fight: "I’m going to smash his face in for him"

Jonny Phillips reflects on last summer's Fight Camp: It was like a little holiday for me really

Jonny Phillips is planning on handing Keighley Featherweight prospect Ibrahim Nadim his first loss when they collide on the undercard of Josh Warrington vs. Mauricio Lara at The SSE Arena, Wembley this Saturday February 13, live on Sky Sports in the UK and on DAZN in the U.S. and more than 200 countries and territories.

'The Matador', or 'Mental Jonny Phillips' as promoter Eddie Hearn calls him, won fans over with his crazy antics in the Essex bubble last summer ahead of his points loss to highly-rated Leeds Featherweight talent Hopey Price on the second instalment of Matchroom Fight Camp.

Phillips jumps back in the ring with another top youngster this weekend, Ricky Hatton-trained 21-year-old Nadim, who has won both of his professional outings on points. The business owner from Sandhurst believes he will have too much experience and size for Nadim.

"To be honest I never watch any of my opponents. My coach does that because he knows more than me. We’ve come up with a little game-plan. We’re just going to get in there and get the job done. I’ve had the right amount of time to get the weight off.

"Last time I had to cut a lot of weight, and because it was around the first lockdown, I hadn’t been in the gym that much. I haven’t left the gym since that fight really. Mentally, I’m ready for everything, and I really think it’s going to be my night. I’m going to go out there and steal the show for a second time.

“I’m ready to rock and roll. My team tell me he’s a good amateur and he has a good jab. There’s a couple of negative things they’ve seen in him. That’s what we’ve been working on. I’m not going to take anything away from him. There’s no bad blood there. I think Hopey is a little bit better than him.

"I’m actually stepping down another weight so I’m going to be an absolute monster in there compared to him. I just don’t think he’s experienced enough. This is my 11th pro fight now – I’ve been in there with World Title contenders and British Champions.

"He’s had two fights against two bums and he couldn’t even stop them. I’m not worried at all. He seems like an alright fella and he was a good amateur, but I think I’m going to smash his face in for him. I’ve had four weeks’ notice and it feels like I’ve had a full camp. I just can’t wait to get in the bubble."