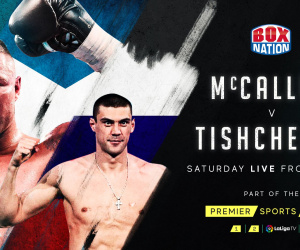 Edinburgh's John McCallum (12-2) was knocked out in the second round of his WBO European title fight with Russian giant Evgeny Tishchenko (8-0, 6KOs).

It was the biggest fight of Scotsman John McCallum's career as he attempted to win the vacant WBO European Cruiserweight title against an Olympic heavyweight champion over 3,000 miles away in Ekaterinburg, Russia.

The 32-year-old from Edinburgh is a former International and British Masters champion, who last fought in February 2019, beating journeyman Casey Blair in a points win.

29-year-old southpaw Tishchenko started strongly on home soil, boxing superbly from distance with a crisp jabbefore stepping in closer in the second round to floor the Scot with left body shot. McCallum bravely rose to his feet but the lasting pain on his face was enough for referee Victor Panin to wave off the fight at 2:07 in the second stanza.

WBO #7 Tishchenko now adds the WBO Euopean to his WBO Inter-Continental title and moved up to eight wins unbeaten with six KOs.

'Johnboy' has been largely inactive during his career, only managing one fight per year for the last three years. He was due to take part in Ultimate Boxxer in 2018 but was forced to withdraw through injury, tearing his rotator cuff during the training camp for the knockout tournament.

Plagued by injuries, McCallum has announced his retirement in the past but he teamed up with former opponent Leon McKenzie to keep his career going. Having first debuted in November 2010, this latest loss has come just days before his 10-year anniversary as a professional boxer. Only 14 fights in 10 years doesn't equate to a successful career for the talented Scot.

WBO #9 Romanov, 35—who owns an amateur win over Wilder—waited for his opponent in the first but the 44-year old Belarusian could hardly offer little other than some lazy jabs to try keep Romanov at bay. The Russian was indeed at bay but only because of his slow-starting habit. He got back to workin the second and soon put Lyakhovich (just 2-5 over the last ten years) in trouble. He connected with a hard right hand, which was well felt by the White Wolf despite a high guard, then followed it up with a wicked left hook, which rocked Lyakhovich, and got the job done with a right hook to the spleen, while the former champ was already getting down. Time was 1:38.

Mikhaylenko, 34, who had a very successful stint in 2014-2016 with wins over Sechew Powell, Johan Perez and Karim Mayfield among others, was just 2-6 after the Mayfield win. Kurbanov, 25, on the other hand, scored the first-round kayo of Ilya Ochkin in August, which snapped his five-fight streak of unanimous decisions.

This time, Kurbanov was equally effective. He felt Mikhaylenko out in the first, slowly upgrading his pressure to trouble the Mechanic. In the second, Kurbanov rocked Mikhaylenko with a wicked left hook to the body, cornered him but failed to finish immediately. The end was near though as another left hook to the solar plexus almost doubled Mikhaylenko down. The Mechanic signalized he wasn't willing to go on. Time of stoppage was 1:37. Kurbanov improves to 21-0, 13 KOs.

In a battle of two veteran lightweights, IBF #14 (and once-ranked WBO #1) Roman Andreev (24-0, 17 KOs) remained undefeated with a devastating knockout of former contender and fellow counterpart Pavel Malikov (16-3-1, 6 KOs) in an important cross-roader.

Andreev, 34, hasn't fought for a year and a half, and it has affected him early on. Malikov, also 34, was a notch faster and landed combinations being aggressive as usual albeit against a bigger opponent. One of the punches reddened the face of Andreev, who lost the first one. However, in the second round the undefeated fighter slowly worked his way in. Late in the second, both fighters clashed in an exchange and landed punches of his own but Andreev's punch was way harder, putting Malikov down in a delayed fashion. Pavel was conscious but his legs gave up, and he failed to beat the count of ten. Time of stoppage was 2:50 of the second round.

Roman Andreev is next set to fight Malikov's penultimate conqueror Zaur Abdullaev (who stopped Malikov in August) in one of major sanctioning body's eliminators.

Petrosyan didn't waste much time adapting for his counterpart. The Ukraine-based Armenian easily exposed Umurzakov's defensive flaws, especially when the latter remained idle after releasing his own offensive. Petrosyan rocked Umurzakov in round one and continued to look better in the exchanges due to better reflexes and greater speed. Umurzakov, a hard-punching lightweight, did his best to connect with meaningful punches of his own but couldn't land cleanly enough. The Uzbek Prince has lost for the second consecutive time.

21-year old super bantamweight Oleg Lyashkov (7-1, 1 KO) scored an eight-round unanimous decision over dangerous Kazakhstani Yerzhan Zalilov (11-3-1, 5 KOs) in a significant step-up fight. Lyashkov, not a bug puncher but strong and determined, pressed the action against Zalilov and remain one step ahead of his stubborn challenger. Zalilov's face was red by the end of the opening stanza, and he continued to bleed from several cuts in later rounds. The ringside physician was called in round seven to examine Zalilov, who was on the brink of dismissal but was allowed to go on. It hasn't reflected the flow of the fight as Lyashkov won all but (arguably) one round.

Uzbekistan-born lightweight Dmitry Yun (5-0, 1 KO)—who officially resides in Thousand Oaks, California in the United States and and competes under the RCC / German Titov Promotions—scored a hard-fought majority decision against fellow Uzbek challenger Sherzodjon Abdurazzokov (1-1) over six rounds. Yun was slow and out of shape early on but gradually worked his way back to the fight and took the end of it.

In a two-way, fan-friendly scrap, light welterweight Oganes Ustyan (4-0, 2 KOs) was lucky to escape with a questionable split decision against determined Russia-based Tajik Ramazon Alimatov (0-2). Ustyan was putting way too much into his punches in early rounds and gassed out by the mid-point, losing the six-rounder.