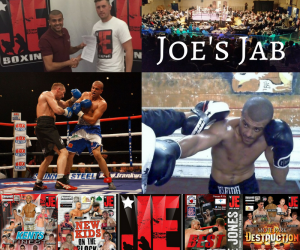 JE Boxing is the only professional boxing platform in Kent, owned by ‘The Moroccan Machine’ – Joe Elfidh.

As a promoter, he is single-handedly bringing big-time boxing back to The Garden of England already reviving pro boxing in Maidstone for the first time in 16 years and delivering the first ever pro boxing show in Sheppey history.

Welcome to his new weekly column exclusive to BBN.

I was with my super-featherweight prospect Martin Hillman last Saturday at York Hall, as he defeated Hull’s Luke Fash 57-59 on points over six-rounds.

Martin is an International Challenge belt winner and I have secured him a shot at the vacant Southern Area super-featherweight title against Frank Warren’s prospect Boy Jones Jr. next month.

Jones, 19-years-old from Chingford, is unbeaten in 11 fights and the pair have shared the ring with three of the same opponents.

Jones is going into the fight as the firm favourite but Hillman has been training hard for this and will surprise him and everyone else.

First ever pro show in Sheppey

I have just booked the first professional boxing show to ever take place on the Isle of Sheppey on December 3rd at the Oasis Academy in Sheerness.

Sheerness is a popular seaside town located on the Isle of Sheppey in Kent. It’s home to a population of 12,000 and also home to Ray Askew’s Invicta Gym, where two of JE Promotions’ heavyweights train – unbeaten Dave Jones and WBO NABO title contender Tom Dallas.

Ray trained me throughout my professional career during 2007 – 2013. He is the one person that I truly trust in boxing and I seek has advice on a daily basis.

Both heavyweights will be in action on the December 3rd show, as well as my unbeaten middleweights Oli Edwards and Grant Dennis.

Hopefully, ‘Go-Getter’ Dennis will be the Southern Area champ at 160lbs by then – he challenges for the title in Brighton on November 12th against champion Nicky Jenman.

To talk more about the exciting developments that JE Promotions have got going on in Sheppey, I’d like to hand over to my mentor Ray at this point…

The main reason that we looked to do a show in Sheerness – or Minster really – is that boxing is massive on the island.

It goes back to years ago in the early 80’s when boxing was in its heyday. Sheerness ABC was a really successful boxing club thanks to Joe Shcembri, it was right up there with all the good London clubs.

Because of that era, there’s always been a big boxing fan base. There’s been plenty of amateur shows and a few semi-pro and unlicensed in Sheppey, but never professional.

One of the things about our gym is that we are totally nonpolitical. It’s not a place that looks to poach people, if we ever did poach someone then I’m not sure I’d ever trust their loyalty!

At this moment in time, we’ve got good plans in place for our heavyweights. Dave Jones is unbeaten in six fights and building up nicely.

We plan for Tom Dallas to have two good warm-up fights then we’ll be looking for the Southern Area next, then work our way forward from there.

A lot of his losses were down to bad decisions by his own admissions. He took the David Price fight at just five day’s notice and has been carrying an elbow injury for the last eight years! It’s been operated on few months ago and it’s all working well now.

We’ve done our little bits with him in the Invicta Gym and right now he’s punching so hard that I don’t think there’s anyone out there that’s hitting harder than him. If we can get his power working right then he could knock out anyone in the world!

He was an ABA finalist twice, at a time when the heavyweights were really competitive. His boxing was pretty good when he first came to us, as he has operated at the highest standard in amateurs and pro.

However, there was just one common denominator when I watched all his fights that was all wrong.

His last trainer is my mate and he did a brilliant job but it just needed someone watching on the outside to pick this up and I saw it in every single one of his fights, and it would have been a game-changer in any one of his losses.

Tom has taken everything we have told him on board and he’s doing exactly what we ask for, just this small change in his game and it’ll be a significant improvement.

Our young middleweight Oli Edwards is growing day by day. At just 21-years-old, he is still very young. The thing with Oliver is that we are trying to make up for his lack of amateur career, he had about six fights before turning pro.

I know him very well and have trained him since he was seven-years-old. His dad is a very good friend of mine and I even trained him, too.

Each opponent we pick for Oliver is one that will create some sort of problem for him to be able to overcome it in the best way he can.

I still don’t believe he’s anywhere near his man-strength yet. His dietician keeps him perfectly on weight so when he gets into the ring, he is strong and ripped to pieces.

His sparring is getting really good so just got to take out time and see what comes our way. The Challenge belts are not too far off for Oliver, his next fight on October 29th in Maidstone is a four-rounder, and then we’ll possibly jump him up to six-rounds for the Sheppey show on December 3rd.

He’s such a popular kid and sells tickets like no-one’s business! That’s not just due to his boxing ability, he is exciting, but because he’s a nice lad and not a bad bone in his body.

The Oasis Academy is a brand new purpose-built building which holds around 1,000 spectators so the show is set to be a big success and hopefully the first of many for Sheppey!

Dennis plans to be a menace at York Hall this Saturday