Brentwood boxer Joe Mullender (11-2), stopped Ben Capps (14-6-2) in an affair that was far from one-sided, despite the early ending and facial injury.

The former English and IBF European titlist took on Manchester’s Capps, who came into the fight off the back of successive first-round KO victories, at late notice at the Brentwood Centre, live on BT Sport, and dropped him several times before the referee Kieran McCann called a halt to proceedings after 1:46 of round seven of a scheduled 10.

In the opening round, the tough pair met in the middle with Mullender whipping in some big body shots early. The 25-year-old travelling opponent, who has had 20 of his fights in Australia, scored some eye-catching uppercuts at the start of the second segment, but Mullender, undeterred, walked his foe down persistently. It was the only successful round on the scorecards for the Mancunian and he found himself on the canvas in the third. It was a very clever move from Mullender as he tapped on Capps' gloves with his right hand to open up his tight guard and landed a blisteringly fast left hook directly on the chin seconds after.

The Essex puncher continued to pressure Capps and was consistently successful with the left hook in the fourth, which was the offending punch that caused his opponents' jaw to swell badly. A perfectly placed left hook to the body forced Capps to take a knee in the last moments of the round. Despite being decked twice, the brave away fighter started the sixth segment brightly with two lovely right hands but the shots just seem to bounce off Mullender, who carried on with his seek and destroy tactics which eventually caused a nasty swelling to the right side of his opponents' face.

30 seconds into the seventh and Capps went down again but he bravely rose to his feet, nodded to referee McCann and came back firing, landing a series of heavy right hands to Mullender's head. Another right hook to the body was the final blow needed to stop the fight, despite Capps beating the count, the officiating referee wouldn't allow him to continue, but he would have earned many fans with his gutsy performance. The Briton emigrated to Australia in 2005 and won WBC and IBO Asia Pacific / Oceania titles, beating Floyd Mayweather Jr. sparring partner Fred Tukes along the way.

The victor, 'Smokin' Joe Mullender', has had an unfortunate year after testing positive for a banned substance after his last fight with Welshman Lee Churcher in December 2017, which saw him stripped of the IBF ranking title. The ruling stated that Mullender had not acted intentionally and was not accused of cheating after an illegal ingredient was ingested despite not being listed on the product label. The 32-year-old has battled all year to clear his name and was forced to accept a backdated four month ban, which is the lowest punishment that can be received.

With Jason Welborn vacating the British middleweight title earlier in the month, stablemate Mark Heffron is without an opponent on December 22, which could be an easy fight for Frank Warren to make for Mullender.

Headliner Anthony Yarde moved up to 17-0 with a fourth-round stoppage over Walter Gabriel Sequeira in a very one-sided affair.

In the chief supporting fight Peckham's Johnny Garton (23-1-1) claimed the coveted Lonsdale belt with an 11th round stoppage over Wembley's Gary Corcoran (18-3) in what was an incredible British battle.

'The Pexican', badly bloodied by a head cut, took on the 'Hellraiser' at the Brentwood Centre in Essex with the vacant British title at stake and the pair battled in spectacular style from the opening bell all the way up to 42 seconds into the penultimate round when referee Steve Gray deemed Corcoran, 27, unsafe to continue as he was staggered twice by Garton and ended propped up on the ropes on unsteady legs. Ex-English titlist Garton, 31, added the Lonsdale belt to his IBF European crown.

Zak Chelli (5-0) got the bragging rights over Umar Sadiq (3-1). The pair, who had only had seven fights between them before their clash, wanted to put everything on the line over eight rounds. It was Chelli, a second-year business management student at Surrey University, who won by 77 points to 74 in an enthralling showdown in which the loser was knocked down and the victor was busier and livelier throughout. The 20-year-old Londoner wanted to be Frank Warren's top super-middleweight and got his wish with the impressive victory.

Also on the card, James Branch Jr. won on points against Kent Kauppinen by a margin of 40 to 36 and Hamzah Sheeraz got a win over Zygimantas Butkevicius. 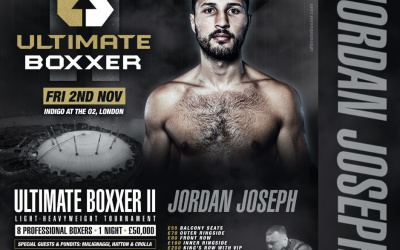 Jordan Joseph “I am taking first place on November 2nd!”