Joe Joyce vs Daniel Dubois could happen this summer

The BBBofC have today called for purse bids to be put forward for the vacant British heavyweight championship by midday on April 10, with the contest ordered to take place before the end of July 2019.

'Juggernaught' Joe Joyce (8-0, 8KOs), 33 from Putney, is currently the Commonwealth heavyweight champion and picked up the WBA Gold belt in his last fight with former world champion Bermane Stiverne (25-3-1, 21KOs).

Wins in America for Daniel Dubois and Tommy Fury

Jake Paul vs Tyron Woodley weigh-in results: Tommy Fury is in incredible shape for his American debut against Anthony Taylor

Joyce is still hunting down his next fight, with Charles Martin touted as a likely opponent. Joyce is mandatory for Agit Kabayel's (19-0, 13Os) European title but the 26-year-old German is rumoured to be lining up a voluntary defence instead. He is also now the No.1 challenger to Manuel Charr's WBA world title, but he is rumoured to be defending against the WBA interim champion Trevor Bryan (20-0, 14KOs) in his next fight.

A fight between Joyce and Dubois would be a huge domestic affair, but with Joyce looking toward European and world title fights, and Dubois vs Nathan Gorman being built up by promoter Frank Warren, it's unlikely it will actually happen.

More likely, Joyce will fight a recognised name next, such as Charles Martin, and Dubois and Gorman both win their next fights to meet for the British championship in a summer showdown on BT Sport.

Frank Warren appeared optimistic, however, after he announced on Twitter, "Delighted the board have ordered Dubois vs Joyce. Daniel has a tought fight on April 27 first up but we asked for the fight, Daniel wants it and we will reach out to Team Joyce to try and make it happen this summer." 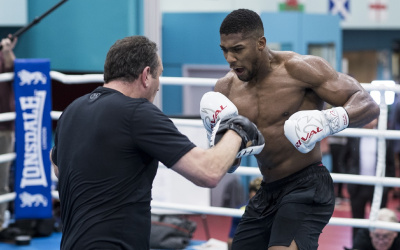