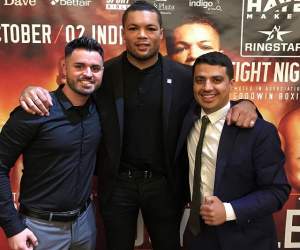 Joe Joyce ‘Has got to stop’ Iago Kiladze in next fight, says manager

Sam Jones tells Danny Flexen about the plan for Joe Joyce, starting with his next fight

The reaction to rugged Georgian Iago Kiladze (26-3) as the next opponent for Joe Joyce (5-0), on the Brit’s September 30 US debut, has been largely favourable. Kiladze is essentially a cruiserweight who has lost each time he has stepped up to anything approaching top level but the 32-year-old has mixed in good company and, for an Olympic silver medallist having just his sixth pro fight and the first with a new trainer in Abel Sanchez, fits the bill for a showcase in Ontario, California and live on Fox Sports. He is 26-3 (18), with two of those three defeats coming against unbeaten opponents. Joyce is a deserved favourite but, as his manager Sam Jones (left in main image) points out, this fight should be seen more as a starter, with a sumptuous main course coming in December, when Joe is rumoured to be taking the chief support slot on the Deontay Wilder vs Tyson Fury megashow. Jones would not confirm this but is excited about his man’s next two tests.

“Kiladze is Joe’s first fight with Abel, his US debut and he’s only lost 3 times,” Jones explains regarding a fighter who is based in Los Angeles, has fought in the US regularly and has appeared previously on Fox and Showtime. “He’s a solid opponent, and effectively a warm-up because we have something lined up for December on a massive undercard, but I can’t go into too much detail yet. I know Kiladze is a battle-hardened campaigner, he’s been in with some top fighters and come up short, so this is to see where Joe’s at. I’m under no illusions, Joe’s got to stop him and stop him well; he’s going to do a demolition job. This opponent had to be someone the US audience is familiar with.

> “In heavyweight boxing anything can happen, but if he comes through this, Joe should face a former world heavyweight title challenger in December, one with a great record, a big, strong, proven heavyweight.”

Joyce is preparing for this fight at the infamous Summit, Abel Sanchez’s impressive complex at altitude in Big Bear. Jones was keen to praise the refreshing range of ages and styles evident in the gym.

“I initially contacted Abel for Joe because I thought their styles would gel very well together and they have,” he notes. “You’ve got GGG there of course, who always gives pointers to Joe. It’s a bit cheesy but it’s very much about teamwork there, everyone helps each other. They’ve got young Ryan Martin who’s fighting Josh Taylor in the World Boxing Super Series (WBSS), veteran Alfredo Angulo, it’s a real mix and a good environment for Joe to be in.”

Joyce has raced to 5-0 (5) and a Commonwealth heavyweight title in less than a year as a pro. After an amicable break from former coach Ismael Salas he began working with Sanchez in July, and also added highly influential advisor Al Haymon to a team that already included Jones, Richard Schaefer and Adam Moralee (right in main image). The Londoner turns 33 in a couple of weeks so, with no time to waste and talent in abundance, the accelerator pedal is very much pressed to the floor.

“Joe will be challenging for a world heavyweight title either by the end of next year or the very early part of 2020,” enthused Jones. “Next year, the top five for all the organisations is who Joe’s after. [Jarrell] ‘Big Baby’ Miller, we’ll come back with a better offer for him.”