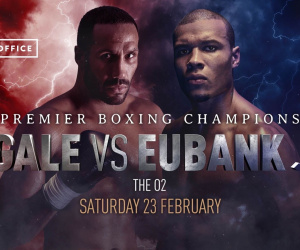 British super-middleweight rivals James DeGale (25-2-1) and Chris Eubank Jr (27-2) are all set to clash in a pay-per-view contest.

DeGale is a two-time IBF titlist and Eubank Jr is a former IBO World champion. Both boxers boast big personalities so it's set to be the biggest fight of the year so far.

BBN have provided all the details viewers need to tune in and watch 'Chunky' vs 'NEXTGEN' on the eighth weekend of the year.

AJ or Usyk next for Joe Joyce, who becomes WBO mandatory challenger if he beats Carlos Takam

The bout takes place on February 23

12 three-minute rounds at the super-middleweight limit

UK fight fans can expect DeGale and Eubank Jr to make their ringwalks any time after 10pm (GMT) introduced by Jimmy Lennon Jr.

Coverage starts at 6pm live and exclusive on ITV Box Office for £19.95. There will free-to-view build-up action on ITV4 from 6pm, before ITV Box Office broadcast begins at 7pm.

Inevitably, retired World champion George Groves will be in attendance as a pundit, having beaten both men during his illustrious career.

Former IBF World champion Lee Selby returns to the ring following his loss to Josh Warrington last year to face hard-hitting American Omar Douglas with a championship title on the line set to be confirmed shortly.

'The Juggernaught' Joe Joyce gets his acid test as he defends his Commonwealth title in the biggest test of his unbeaten career when he takes a gigantic leap up to confront the former WBC World Champion Bermane Stiverne.

There's a debutant appearing on the card who may be one of the most decorated amateurs of this millennium - Chez Nihell. The 31-year-old from Aldershot cleaned up in the amateurs and was just recently voted Army Sportsman of the Year 2018 - definitely one to watch!

Sebastian Eubank - the younger brother of Chris Jr - has his second professional fight on the undercard against debutant Dan Belcher. The 27-year-old is the fourth member of the famous fighting family to enter the paid ranks - following Junior, cousin Harlem and half-brother Nathanael Wilson.

Everything you need to know about DeGale vs Eubank Jr HERE