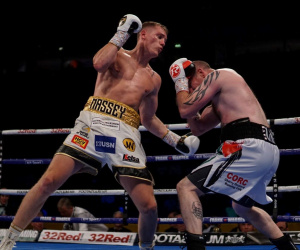 Fearsome cruiserweight Jack Massey heads for a pair of Manchester fights in November and December looking to tee up a tilt at British champion Lawrence Okolie.

The Derbyshire fighter has impressed in cruising to 14-0-KO7 and is out on the #WarsintheWarehouse card on November 9 before a slot on the Josh Warrington vs. Carl Frampton undercard on December 22.

Massey – just 25 – is already engaging in some social media sparring with Olympian Okolie (10-0-KO7), who won the British belt from Matty Askin, and although those methods don’t necessarily come naturally, he’s ready to do what it takes to secure title shots.

Massey said: “There’s been a bit of back and forth between myself and Lawrence on Twitter, which isn’t usually my style but it looks like a lot of fights are made this way now.

“I’ve been promised some big title fights so let’s see what we can get. A shot at the British title would be perfect for me.

“There was quite a lot of upset about Okolie’s last fight which is not good to hear. Being a cruiserweight myself, you want people to see that it’s a booming weight division. The more interest in the division, the better.

“I’m excited for these two fights. It’s so exciting to be on a bill like Warrington vs. Frampton in particular. It’ll be like a home show for me and what an event that’s going to be.

“I’ve not really had a break out of the gym and I’m always learning. I just got back from sparring the world No. 2 Mairis Briedis in Latvia so that’s going to stand me in good stead. I’m still improving all the time.”

Predictions for Ryan Burnett vs Nonito Donaire and betting odds