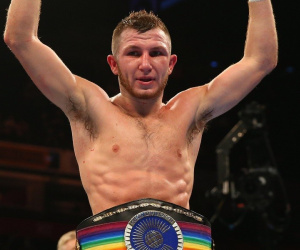 Isaac Lowe looking for a big name this year

Isaac Lowe plans on keeping the momentum going after being added to the packed MTK Global show at Bowlers Exhibition Centre in Manchester on March 15.

World-ranked featherweight Lowe (16-0-3) returns to action following his impressive win on the Tyson Fury vs. Deontay Wilder undercard in Los Angeles in December, and he now wants to kick on and achieve good things in 2019.

MTK-managed Lowe said: “I’m over the moon to be getting back in the ring. It’s going to be a great start of the year and I’m glad to be keeping busy.

“I had the good win in America in December which got me the WBC International title and a top 15 ranking, and that means I need to push on and keep the momentum going.

“I’ll have a good eight round fight in Manchester, and then we’re looking at a big name later in the year. It’s time for me to put my head down and keep working hard towards world level.

“I’ve been training over at MTK Marbella and that has been great. You have got everything you need over there with some fantastic facilities, so I really enjoyed my four weeks out there. I’ll definitely be going back in the future for more camps.

“It’s been really good since teaming up with MTK, and they’re going worldwide. If they can do half as good a job with me as they have done with some of the other fighters, I’ll have a great career.”

Lowe’s fight will be part of a stacked MTK Global show live on iFL TV, with the main event seeing unbeaten David Oliver Joyce go up against Stephen Tiffney for the vacant WBO European featherweight title.

There are a number of exciting stars on the undercard too, including Ben Sheedy, Macaulay McGowan, Craig Bunn, Adam Hague, Damian Chambers and many more.

Jono Carroll believes Tevin Farmer is already intimidated by him

Deontay Wilder vs Tyson Fury 2 is off