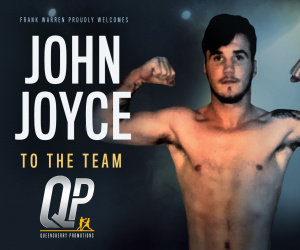 John Joyce signs with Frank Warren and debuts on July 15

Decorated amateur star John Joyce has signed professional terms with Frank Warren and will make his debut on the undercard of the Josh Warrington-Kid Galahad world title clash at the FD Arena in Leeds on June 15.

The 21-year-old from Moate in Ireland is a veteran of 200 fights as an amateur, during which time he became a nine-time Irish champion at junior level.

Although hailing from Ireland, Joyce has relocated to Airdrie in Scotland to prepare for his professional launch at super welterweight, working with respected trainer Billy Nelson.

“I’ve had the urge to turn to the professional side of the sport for the last couple of years and now that I have, I’ve learnt that this suits me so much better," commented Joyce on his transition.

I’m a full-time boxer now and joining Billy and moving away to Scotland has been no problem. I train every day and I work hard in the gym every day and that is how I like it. I can focus on my boxing every day with Billy, so I believe it’s been a better move for me to moving to Scotland.

“It’s an amazing opportunity for me fighting on the undercard of Josh Warrington. Seeing what he has done and the fan base he has, I believe when I get myself in world contention I will be able to bring big nights of boxing to Ireland.”

Promoter Frank Warren added: "I am delighted to have another top quality young fighter join forces with us and I firmly believe we currently have the most richly talented crop of prospects in the business on our books.

"The stage is all set for John to make a big impression and there is no better place for him to get started than in Leeds in front of a fervent crowd at the FD Arena."

Josh Warrington tops the bill at First Direct Arena, Leeds when he defends his IBF featherweight championship against Kid Galahad on Saturday June 15.

Tickets for Warrington v Galahad are available via Ticketmaster